Basho had been at the temple Gichu-Ji 義仲寺 to view the autumn moon on the 15th. Next day, on the 16th, they went to the Floating Hall, Ukimi-Do.


名月や児立ち並ぶ堂の縁
. meigetsu ya chigo tachinarabu doo no en .
the temple acolytes are lined up at the veranda


Basho stayed at the Gichu-An 膳所の義仲庵
earlier on this ravels in the 9th lunar month of 1691, Basho age 48
at the home of his diciple Kukuu 句空 Kuku.

Kenko did not have much possesions, some say only one pot to wash his hands and take his meal. He kept this possession on his daily walks praying for food.

nukamiso is salted rice-bran paste for pickling, barley miso
This is kept in special pots with a lid, even now in the "color of autumn".
. Food Hokku by Matsuo Basho .


quote
“Sabishisa,” a word derived from the adjective “sabishi,” conventionally implies loneliness in Japanese literature. Bashô, however, often uses the word in close relationship with “shizuka.” The following poem, which contains the word “shizukasa,” also has a different draft that uses the kanji normally used to transliterate “sabishisa.”

How quiet it is!
On the wall where the painting hangs —
a cricket.


How solitary it is!
Hanging on a nail —
a cricket.

“Cricket” (kirigirisu) is a seasonal word of autumn. It typically is associated with loneliness and autumn melancholy in classical Japanese poetry. The hon’i or poetic essence of kirigirisu, according to classical tradition, lies in the faint sound of its singing.

Bashô’s verses, however, focus on neither the song of the cricket nor the melancholy atmosphere evoked by it. According to Kukû, one of Bashô’s disciples for whom these poems were written, he was with Bashô at a small cottage when the first poem was composed. The master woke him up one night to listen to the feeble chirps of a cricket. Later, when Kukû asked for a poem on his painting of Kenkô, Bashô wrote the poems.

If this story is true, the cricket did sing that night. The silence of the cricket in Bashô’s poem, therefore, is not a depiction of the real occurrence but an intentional fabrication. Instead of following the conventional hon’i, Bashô cast the little creature against a background of eternal, profound silence, creating a suggestive scene of the seclusion included in tranquility.

In discussing the two pairs of Bashô’s poems that use “shizukasa” and “sabishisa,” Makoto Ueda observes: “Certainly it is more than a coincidence that the word ‘quietness’ is used in place of ‘loneliness’ in both poems. 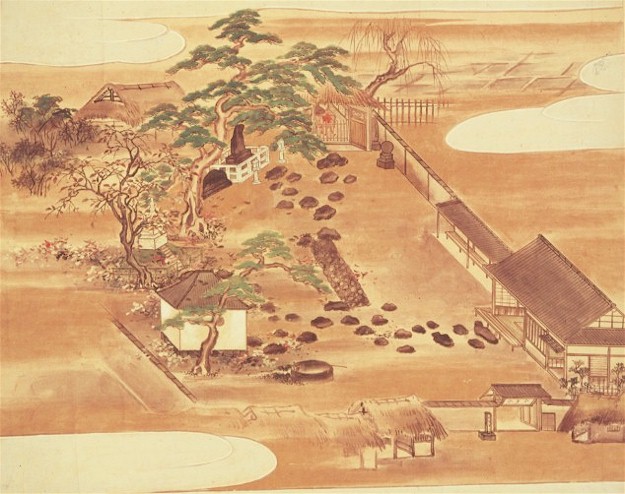 A sick goose fallen,
I slumber at Katada
In my wandering.

However, his friends at Otsu and Zeze looked after him very well till our master regained his health and enjoyed short stays at Genjuan Cottage and Gichuji Temple. He spent some years visiting famous sights in the vicinity, infusing his mind with their beauty.

. . . . . Our master had no permanent abode and travelled in all directions, invited by his friends, if he had died at Matsushima in the deep north or at Mt. Hakusan in the province of Echizen, we would not have been able to do anything for him except to express our sorrow at the sad news, but here, we could guard him from the wind, sitting close to his remains. I was thinking about his disciples who were not so lucky as we were, when birds began to awaken me, and soon, while counting the strokes of the temple bell that began to toll, we reached Fushimi.

We moved our master’s remains from Fushimi to the Gichuji Temple, where his funeral was performed with solemnity and sincerity. His disciples, people of different ranks high and low, came from Kyoto, Osaka, Otsu, and Zeze, for they earnestly desired to pay their respects to their loving master. More than three hundred people attended the funeral, uninvited. His white robe and other necessary things were sewn by two ladies, Chigetsu and Otokuni's wife.

After the funeral, Priest Chokugu of the Gichuji Temple, led us to a small mound and buried him, as our master desired it himself, next to the mound of Lord Kiso, a little behind the temple gate, near the place where an old willow tree was standing. We thought there was a mysterious connection between Lord Kiso and our master, so we made our master’s grave similar in shape to the grave of Lord Kiso, and built a simple fence round it. We also planted for his name’s sake a stock of basho tree which had withered in cold weather.
source : simplyhaiku 2006 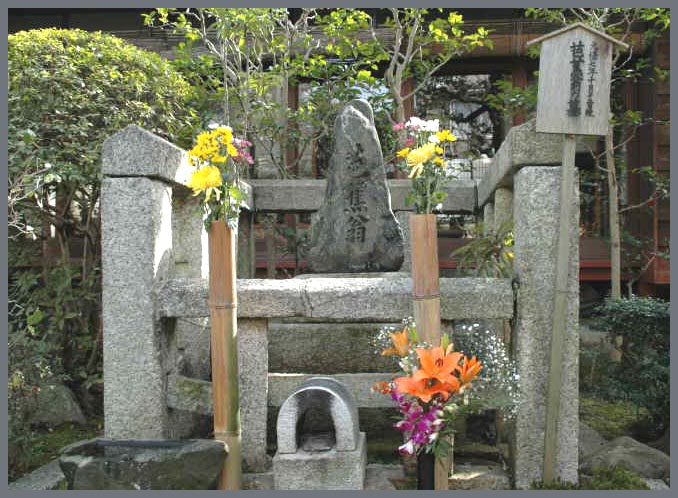 
Basho walked
this road, I realize
and slow at the thought

At the grave of Basho
bees buzz in the flowers -
what can I say?

collecting mudsnails -
the temple Gichu-Ji afar
in the evening light


Basho Okina Ekotoba Den 芭蕉翁絵詞伝 The Life of the Venerable Basho in Pictures and Words
picture scrolls of the biography of Basho the Elder
at temple Gichu-Ji in Otsu 滋賀県大津市・義仲寺所
. www.bashouan.com... . 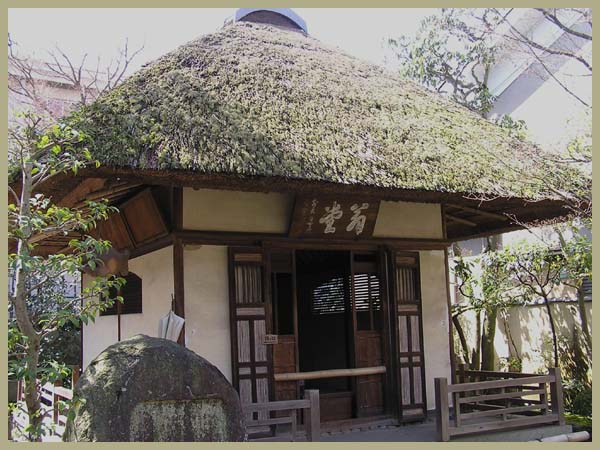 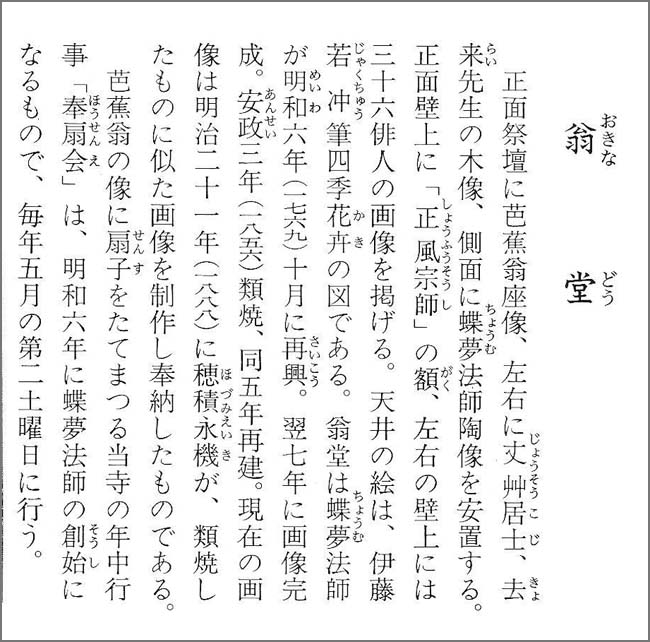 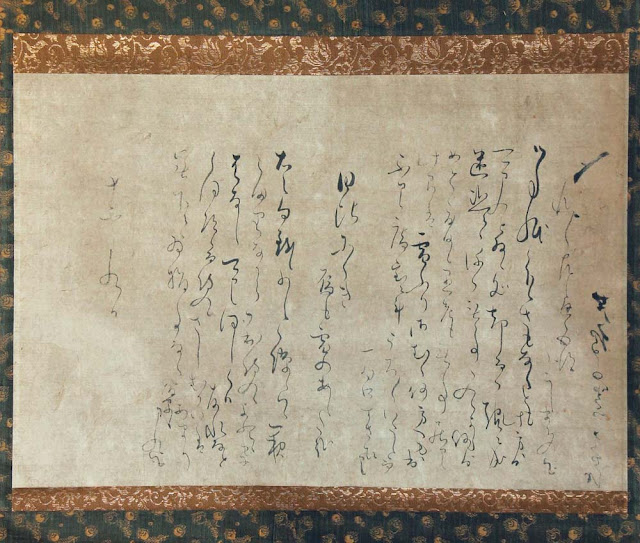 A wonderful poem embedded in a compilation of polite standard phrases, which even a poetic genius like Matsuo Basho was using. Basho seems slightly embarrassed when he writes that he was sorry to have nothing special to pass on.

"Thank you for sending me a letter. – I should have written earlier. I am sorry. I am happy to hear that you are fine. I am fine too.
The other day, it was snowy and very cold. I was in my hut and did not go anywhere. Then, I composed this Haiku:

A crow
Which I'd usually hate.
So beautiful in morning snow.

I wrote this! - When you have time, please visit me and stay for the night. Let's talk together. I will be waiting for you with Yusui*. Although it is not as good if there were only you and me. Sorry to have nothing special to pass on this time. That's all.
– The 12th day of the 9th (lunar) month –
PS I am greatly looking forward to your visit."

The poem was composed in 1691, at Gichu-ji, a Tendai temple in Otsu where Basho often stayed in a cottage called Mumyo-an, "Nameless Hut". Basho was later buried in Gichu-ji temple.

*Yusui, mentioned in the letter, is Mizuta Masahide (1657-1723), a medical doctor and Samurai. As a poet he was a follower of Basho. Masahide was the head of a group of poets who built (paid for) the Mumyo-an.

while I walk on
the moon keeps pace beside me:
friend in the water
(wikipedia)

A Resting Place for His Spirit: Basho in Zeze
from the Basho4Now Trilogy
Translations and Commentary by Jeff Robbins
Assisted by Sakata Shoko

Of all the places Basho visited in his travels, one in particular, Zeze, a section of Otsu, (now around the eastern end of the Omi Ohashi Bridge) just across the mountains to the west of Kyoto, drew in his heart. Basho spent days and months at various locations in Zeze, somehow connecting with the place – so just before he died, he requested that he be buried at Gichuji Temple, a short walk from the shore of Lake Biwa.

One attraction of Zeze to Basho’s heart was the presence of Lake Biwa and the mountains surrounding the shore of the vast lake.
- snip -
We begin just after Basho finished his journey to the Deep North in the autumn of 1689; still traveling, he went to Ise and his hometown Iga (in Mie-ken). From Iga, Zeze in Otsu is just across a range of low mountains to the north. Here, 400 years before, lived the poetess and nun Shosho. In the coldest time of the year, Basho visits Chigetsu for the first time.
- snip -
- source : Jeff Robbins -


Take Back the Sun
By Jeff Robbins
- source : books.google.co.jp -

at Basho's grave
beginning with a prayer...
first paper robe

Paper robe (kamiko) is a winter season word: a thin, wind-resistant outer kimono.
"First paper robe" (hatsu kamiko) refers to the first one worn in the season.
The great haiku poet Matsuo Bashô was associated with winter rain, and he wrote well-known poems about paper robes. His death anniversary, which falls on the 12th day of Tenth Month, is also called "Winter Rain Anniversary" (shigure ki). His grave is at Gichu Temple in Otsu, near Kyoto.