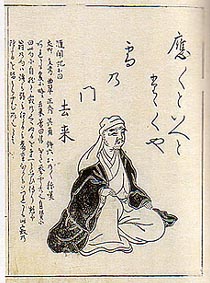 応々といへど敲くや雪の門
oo to iedo tataku ya  yuki no mon

'Yes, yes!' I answered,
But someone still knocked
At the snow-mantled gate
Tr. Blyth


and his home,
Rakushisha 落柿舎 "Hermitage of the fallen persimmon"

Sabi is the color of haiku.
It is different from tranquility.
For example, if an old man dresses up in armour and helmet and goes to the battlefield,
or in colorful brocade kimono, attending (his lord) at a banket, [sabi] is like this old figure.
Tr. Zoltan Barczikay


quote
‘Yamei asked me, what the "sabi" of a poem was?
I said that sabi was in the colour of a poem, not in its subject, however sombre it may be. It is like an old man in armour fighting in a battle, or a man drinking and feasting in his best clothes, and yet looking aged. It can be found in both gay poems and sad poems.
I gave a poem of my own as an example:

The flower keepers —
They put their heads together,
Frosted with white hair.

My master praised this poem, saying that the colour of sabi is well described in it.’
source : Yuasa in haijinx

Rakushisha 落柿舎（らくししゃ）
"Hermitage of the fallen persimmon"
is the cottage of Genroku poet Mukai Kyorai 向井去来.
Kyorai was one of ten disciples of the haiku poet, Matsuo Basho.

quote
The cottage was listed in the Shui Miyako Meisho Zue, an Edo period travel book that listed famous places to see in Kyoto. The name of the place is derived from a story of how Kyorai achieved enlightenment.
As the story goes, Kyorai had forty persimmon (kaki) trees planted around the hut. One autumn, when they were heavy with fruit, he had arranged to sell the persimmons. But during the night before they were to be picked, a great storm arose. The following morning, not a single persimmon remained on the trees. As a result Kyorai was enlightened and from that point forward called the hut and garden, Rakushisha or 'the cottage of the fallen persimmons'.
The poem he wrote for the occasion is inscribed on a stone in the garden:

Master of Persimmons
Treetops are close to
Arashiyama

There's a bit of word play here. Arashiyama is a mountain near Kyoto but it means literally 'Storm Mountain'.


quote
Having been born into a Samurai family, Kyorai was a man of exemplary character and held a spirit worthy of bushi (warrior) all through his life. Not a few of his hokku reflect such personality of his.
For example:

New Year’s Day...
today I shall wear the special sword
handed down for generations

Kyorai was a brave man. One episode which is testimonial to his bravery is to be found in a book entitled “Rakushi-sha Kyorai-Sensei Jijitsu” (Facts of Master Kyorai of Rakushi-sha) written by Genchu Mukai


It is possible that Kyorai began to practice haikai shortly before the compilation of Ichiro-Fu in the summer of 1685. A year before that, namely the first year of Jokyo (1684), Kikaku came up to Kyoto and stayed there for some time during which he had kukai meetings with local haikai poets. This resulted in the compilation of the anthology Shimi-Shu. Kyorai’s name was not yet found in it.
...
The second year of Jokyo (1685) was very important for Kyorai in another way. That is to say that in this year Kyorai had a second home built in Saga area of Western Kyoto. This was the detached house which was to become Rakushi-Sha (Falling Persimons Pavillion) when in 2 Genroku (1689) Kyorai came back from his visit to Nagasaki. There were as many as forty persimmon trees in this second house which indicates that it was quite a sizable estate.

Kyorai’s main house is said to have been situated near Shogo-in in Okazaki. He must have been a man of substance if in addition to this main house he could afford to buy a large estate even if it was in the countryside. There were forest lands in Shogo-in. The area where Kyorai’s main house was located is held to have been called Okazaki Village. Kyorai’s family was a rich family with successful medical doctors. However, Kyorai was not a doctor himself and quite how he amassed wealth is a moot point.

quote
After Bashô’s journey, which he recorded in The Narrow Road to the Depths (Oku no hosomichi), the Shômon haikai witnessed a stylistic change in the 1690s, as Bashô’s disciple Kyorai observed:

"When the late Master came back to the capital from his journey to the far North, our school’s style changed drastically. We all carried a knapsack to see the Master at the Unreal Dwelling, or attended his lectures at the Fallen Persimmons Cottage.
Most of us learned the essentials of the Master’s teaching during that time. Hisago and Sarumino were the results."

The collections, particularly Sarumino, are generally considered representative of the Shômon style of the 1690s, which Bashô describes as karumi (lightness). In karumi, Bashô called for naturalness and spontaneity in haikai composition as opposed to the heavy conceptual implications of earlier haikai.

“Naturalness” does not seem to be a very unique characteristic in literary theories, but to achieve naturalness in haikai is not so easy. As we have seen, the strict compositional rules inherited from renga predetermined the occurrence of seasons and themes at certain locations of a sequence and required poets to compose on cherry blossoms and the moon at particular places and limited times. They also restricted the mention of specific topics to a number of successive links, and even prescribed in what form a line cuts and a link ends.
Clearly, these regulations made it extremely difficult to achieve naturalness in haikai composition.
Moreover, in order to transform haikai from an entertaining pastime to a high art, for more than a decade Bashô and his followers tried to infuse it with a greater cultural and literary import.
Their adaptation of Daoist themes in the 1680s was a major part of this effort. 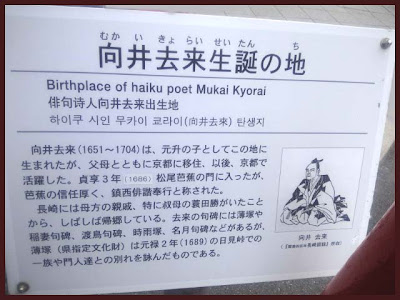 wishing to know
how long the spring mist extends
over Nagasaki

This poem is said to be one which Kyorai wrote wistfully longing to return to his hometown, Nagasaki. This actually came true in Genroku 2 (1689).

When he was only 8 years old, his father, Gensho, took the whole family from Nagasaki to live in Kyoto. It was in Manji 1 (1658). This means that Kyorai was away from his birth place for 31 long years. He was already 38 years old.

He arrived there in summer which quickly turned autumn when he had to leave back for Kyoto already. He left behind a poem which since has become one of his most celebrated haiku:

your waving hand
must be mingled among
the pampas grass

His family and friends did not want him to go and came as far as the hill called Himi, the boundary, to see him off, where there were pampas grass waving in the autumn wind as they said the final goodbye to the departing traveller. This haiku was published in the famous Sarumino(The Monkey’s Straw Raincoat) and the kotoba-gaki (a kind of note) says “Departing Ushichi at the Himi Hill when coming back from Chikushi (the Province of Nagasaki)”. Ushichi was a relative of his, said to be either his nephew or cousin or cousin-in-law, and was very close to Kyorai in that he discussed haikai with Kyorai a lot and had tutorial from him.

The Himi Hill is now part of the administrative district of the City of Nagasaki and calledSusuki-zuka-cho. There is a stone monument there which was erected in Tenmei 4 (1784), bearing this haiku. To reach there you follow the old Nagasaki Gaido and climb up to the Himi-toge which will lead to Yagami-mura and Susuki-zuka can be found there. It is very picturesque and it commands a fine view of the Mount Unzen. In the past one could not enter or come out Nagasaki except for passing this particular route. It is believed that this haiku was the only known poem Kyorai wrote in commemoration of his first return to his homeland.

. . . . . Are there any other stone monuments in Nagasaki with inscriptions of Kyorai’s poems? The answer is in the affirmative.


Arashiyama 嵐山 "Storm Mountain"
is a district on the western outskirts of Kyoto, Japan. It also refers to the mountain across the Ōi River, which forms a backdrop to the district. Arashiyama is a nationally-designated Historic Site and Place of Scenic Beauty. 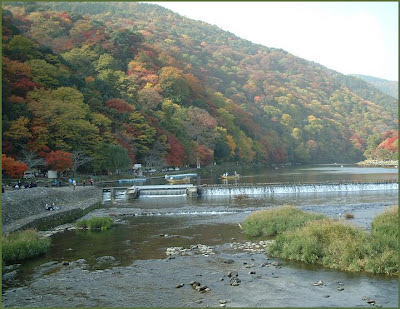 
the six month -
clouds are laying on the summit
of Mount Arashiyama
Tr. Gabi Greve

the sixth month --
with clouds laid on its summit
Mount-Arashi
Tr. Ueda Makoto

Basho is referring to the sixth lunar month.