Hatsuyume (初夢) is the Japanese word for the first dream had in the new year. Traditionally, the contents of the dream would fortell the luck of the dreamer in the ensuing year. In Japan, the night of December 31 was often passed without sleeping, thus the hatsuyume was often the dream seen the night of January 1. This explains why January 2 (the day after the night of the "first dream") is known as Hatsuyume in the traditional Japanese calendar.

It is considered to be particularly good luck to dream of Mount Fuji, a hawk, and an eggplant. This belief has been in place since the early Edo period but there are various theories regarding the origins as to why this particular combination was considered to be auspicious.

snow on Mount Fuji -
Rosei creates the world
in his dream

Basho age 34
He compares the fresh white snow of mount Fuji to the mountain of silver which the young Rosei saw in his dream.


The proverb is
Kantan no Makura 邯鄲の枕 Pillow of Kantan
Kantan yume no makura 邯鄲夢の枕
Kantan is a city in China.

Rosei no yume, Kantan no yume 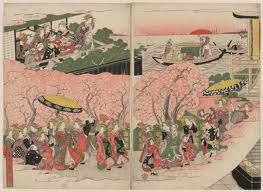 
quote
the Chinese tale of Lu Sheng ((廬生), in Japanese: Rosei), (713 - 741)
a young man who falls asleep in the Zhao capital of Handan), and dreams of glory but wakes to find that the millet at his bedside has not even begun to boil. However, in the manner of a roman à clef the reader is given visual and textual clues that the characters actually represent contemporary figures such as the kabuki actor Segawa Kikunojō II (瀬川菊之丞（二世）), and these figures' personal lives are parodied.
© More in the WIKIPEDIA - 草双紙 !

"... The emphemerality, the dream-like nature of such "ambitions" (yume), is foreshadowed in the opening phrase of the prose passage ("in the space of a dream," 'issui no yume'), a reference to the Noh play 'Kantan', about a man (Rosei) who napped and dreamed a lifetime of glory and defeat while waiting for dinner. ..."

Basho was visiting Iragozaki, a place famous for its hawks.
His disciple Tsuboi Tokoku 坪井杜国 (? - 1690) lived there.
This hokku shows his pleasure of meeting his old friend, who had been in exile since about 1 year and a half earlier (since 貞亨2年8月19日).

An earlier variation on the passage was:

-- Tokoku had encountered misfortune and was living at Irago Point, where I visited him. As we were speaking, I heard the voice of a hawk. --

The headnote suggests that Basho had constantly been dreaming of Tokoku, represented here by the hawk, and was now overjoyed to be finally with him.

a hawk in the flesh
is more reliable than
one in a dream
Tr. Shirane

I visited Tokoku, who was living in difficult circumstances at Cape Irago. From time to time I heard the cry of a hawk.

more than dream
the hawk of reality
heartens me
Tr. Barnhill

Even more than dream
the hawk of reality
reassures me.
Tr. Keene


more reassuring
than in a dream
the real hawk
Tr. Reichhold


Basho is writing with respect to a waka in the Kokinshu poetry almanach of the Heian period.

It was little better
than the vivid dream I dreamt —
that meeting with you
in earthly darkness,
black as leopard-flower seeds.
source : Steven Carter


The power of dreams