quote
MU (無) (In Japanese/Korean) or WU in Chinese,
is a word which has been translated variously as "not", "nothing", "without", "nothingness", "non existent", and "non being". 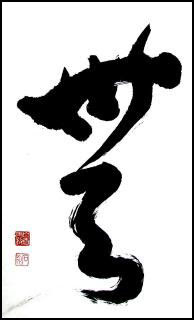 Mushin (無心; (English translation "without mind") is a mental state into which very highly trained martial artists are said to enter during combat.They also practice this mental state during everyday activities. The term is shortened from mushin no shin (無心の心), a Zen expression meaning the mind without mind and is also referred to as the state of "no-mindness". When we realize our own nothingness then we realize the power of our true being.
Steve Weiss


Matsuo Basho and MU
The practice of Zen shaped Basho's thinking and established some life principles. R. H. Blyth, a well-known British theoretician of haiku poetry, linked loneliness, a strong theme of Basho's poetry, with the notion of mu in Zen, a state of absolute spiritual poverty, in which not possessing a thing, one can possess everything.
Susumu Takiguchi

Journal of Bleached Bones in a Field

I set out on a journey of a thousand leagues, packing no provisions.
I leaned on the staff of an ancient who, it is said,
entered into nothingness under the midnight moon.
It was the first year of Jokyo, autumn, the eighth moon.
As I left my ramshackle hut by the river,
the sound of the wind was strangely cold.
Tr. Barnhill

bleached bones
on my mind, the wind pierces
my body to the heart
Tr. Barnhill


quote
Tracing the application of a cluster of Daoist terms, such as zôka, shizen/j’inen, tenkô (heaven’s work), tenrai (the piping of heaven),
kyo 虚 (emptiness), and ki 気 (the primal breath),
back to Chinese critical tradition, this chapter examines how Bashô adapted these notions, particularly the principles regarding the operation of the poetic mind and the criteria of poetic quality, in forming his compositional theories. In both areas, Bashô emphasizes the importance of following zôka to poetic creativity.

In his famous haibun, Oi no kobumi (Essays in my pannier, 1687), Bashô declares that zôka is the single most important principle that runs through all arts.
snip

Zhuangzi says,
“It is only through the Way that one can gather emptiness.”
The “emptiness” is the fasting of the mind (xinzhai 心齊).
According to Lin’s notes, “emptiness” as the mental condition of apprehending the Dao designates a state totally free of subjectivity. An important path toward this state is to let the natural substratum—the primal breath—lead contemplation and expression.
The Zhuangzi afirrms that supreme cognition occurs when one has completely eliminated subjectivity and let the self become one with the cosmos:

kyojitsu 虚実
Interpreted variously as emptiness and substantiality, falsehood and truth, fabrication and verisimilitude, and so forth, this pair of concepts is used widely in Chinese philosophical, literary, medicinal, and military strategic discourses.

The Master has said:
“Learn about pine from pines and learn about bamboo from bamboos.”
By these words he is teaching us to eradicate subjectivity.
One will end up learning nothing with one’s subjective self even if one wants to learn. To learn means to enter the object, to find its subtle details and empathize with it, and let what is experienced become poetry. For instance, if one has portrayed the outer form of an object but failed to express the feelings that flow naturally out of it, the object and the author’s self become two, so the poem cannot achieve sincerity. It is merely a product of subjectivity.
source : Basho-and-the-Dao - Peipei-Qiu 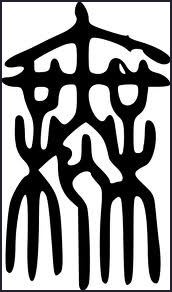