Turning away from the high road leading to the provinces of Nambu, I came to the village of Iwate, where I stopped overnight. The next day I looked at the Cape of Oguro and the tiny island of Mizu, both in a river, and arrived by way of Naruko hot spring at the barrier-gate of Shitomae 尿前の関 which blocked the entrance to the province of Dewa. The gate-keepers were extremely suspicious, for very few travellers dared to pass this difficult road under normal circumstances. I was admitted after long waiting, so that darkness overtook me while I was climbing a huge mountain. I put up at a gate-keeper's house which I was very lucky to find in such a lonely place. A storm came upon us and I was held up for three days.

Bitten by fleas and lice,
I slept in a bed,
A horse urinating all the time
Close to my pillow.

According to the gate-keeper there was a huge body of mountains obstructing my way to the province of Dewa, and the road was terribly uncertain. So I decided to hire a guide. The gate-keeper was kind enough to find me a young man of tremendous physique, who walked in front of me with a curved sword strapped to his waist and a stick of oak gripped firmly in his hand. I myself followed him, afraid of what might happen on the way.

What the gate-keeper had told me turned out to be true. The mountains were so thickly covered with foliage and the air underneath was so hushed that I felt as if I were groping my way in the dead of night. There was not even the cry of a single bird to be heard, and the wind seemed to breathe out black soot through every rift in the hanging clouds. I pushed my way through thick undergrowth of bamboo, crossing many streams and stumbling over many rocks, till at last I arrived at the village of Mogami after much shedding of cold sweat. My guide congratulated me by saying that I was indeed fortunate to have crossed the mountains in safety, for accidents of some sort had always happened on his past trips. I thanked him sincerely and parted from him. However, fear lingered in my mind some time after that. 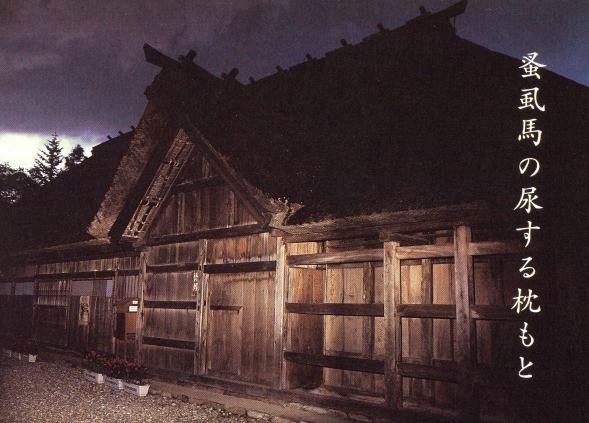 the house of the hoojin,  keeper of the gate 関を守る- 封人の家 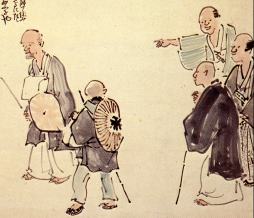 fleas and lice
and a horse pissing
next to my pillow
Tr. Gabi Greve

Written on the 17th day of the 5th lunar month, 1689- 元禄2年5月17日
at the border station Shitomae no seki 尿前の関, Naruko, Miagi
Shitomae, lit "before pissing". 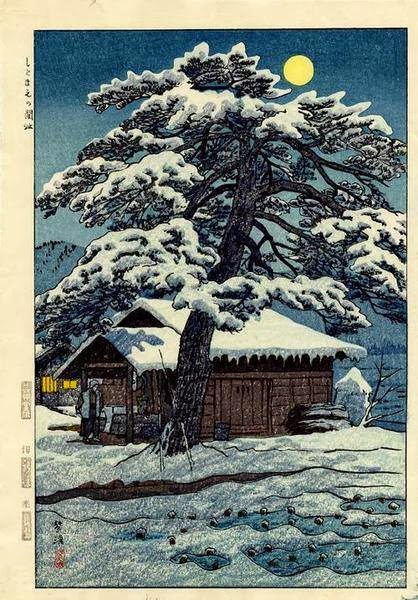 
quote
Here Basho was on his best-known pilgrimage .. recorded in 'The Narrow Way Within' .. at the northern turn of his travels. In a mountainous region, about to pass the barrier between two provinces, he was obliged by bad weather to spend three days at the home of a barrier guard. He counted himself lucky to have any accommodation at all in such a remote place, but the comforts were meager.

Most translators of this haiku interpolate some feeling of disgust. Donald Keene, who usually can be trusted to translate dispassionately, renders the verse:

Plagued by fleas and lice
I hear a horse stalling
what a place to sleep!

That is not what Basho said or meant at all, for he was using that suffering; he was not used by it. Not a single syllable in his original words reflects self-pity. It was just Nip! Ouch! Pshhh!

How does one understand suffering?
Our practice in the Diamond Sutra is not easy. But if there are the tears of sincere pain, they carry precious virtue. Self-pity sullies this virtue, and when self-pity is projected, we have needless dissension in the sangha, the community. The virtue itself shines forth with incisive spirit that drives through the darkness. The pain itself is just that pain.

quote
Basho loved to play with place names in his haiku. This haiku was written at Shitomae Barrier. "Shitomae" literally means, according to David Barnhill, "before the urine."

Basho had to stay there for two nights because of heavy rain (a horse pissing?). According to Ueda, " 'Shitosuru' is a verb referring to a child's urination." Ueda quotes a commentator, Imoto, as saying this gives humor to the poem.

Although in "The Narrow Road to the Deep North," Basho says he stayed at a "barrier-keeper's house," he actually stayed at the house of a village headman, according to Ueda.
Shirane points out that the haiku is split into three parts even though it doesn't have a cutting word.

Donald Richie about the translation of Jane Reichhold:

This is romanized by Reichhold as,
"fleas lice horse's pissing pillow close by" and is translated as,

"fleas and lice
now a horse pisses
by my pillow."

This lyric seems to communicate all that a haiku ought - a salient shift of observation, a seasonal sensibility, an open-ended experience. The translator is to communicate this as economically as did the poet. Here are some attempts.

Nobuyuki Yuasa translates it as:
"Bitten by fleas and lice,
I slept in a bed,
A horse urinating all the time
Close by my pillow."

Dorothy Britten gives it as:
"Fleas and lice did bite;
and I'd hear the horse pass water
Near my bed at night."

Donald Keene has versified it as:
"Plagued by fleas and lice I hear the horses staling -
What a place to sleep!"

Toshiharu Oseki gives it as :
"Plagued by fleas and lice,
Still worse, hearing the horse urinating
Close by my pillow!"

"Fleas, lice,
a horse peeing
by my pillow."

The walk over the steep pass takes more than 3 hours. Basho hired a young guide to make sure he would not loose his way. From the top of the pass you can see Mount Gassan in the background. 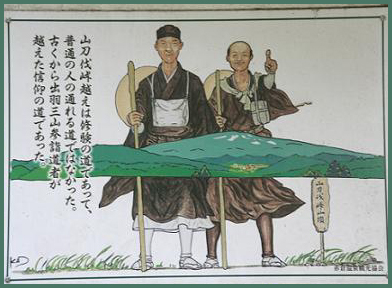 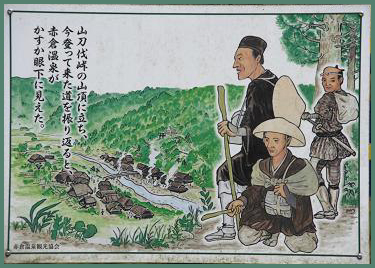 
Look at a painting of the strong young man :
. tsue 杖 Basho and the walking stick .


Further down the pass, there is the hot spring Akakura Onsen 赤倉温泉.
But Basho did not stop there. 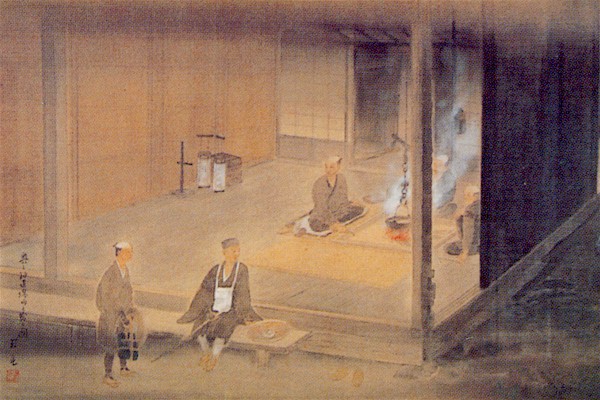 Hoojin no ie 封人の家」訪問の図 高嶋祥光
Painting of the house of the border warden.
source : www.bashouan.com