The shrine is nearby at Tokiwa, Koto Ward 江東区常盤1-3 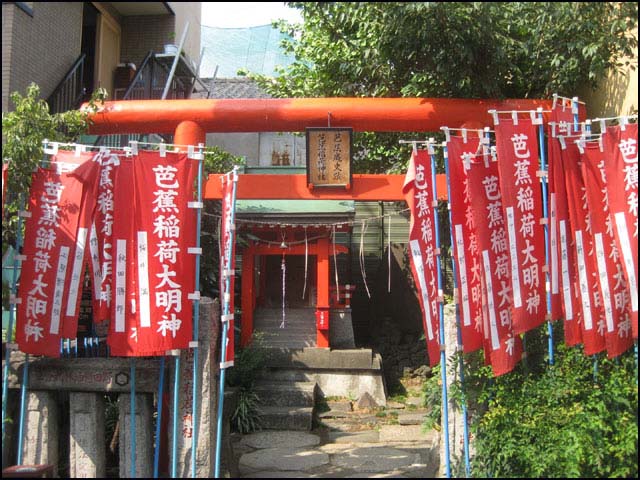 On the red flag it reads 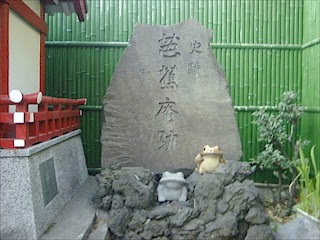 
quote
Basho Inari Jinja Shrine
It is said that after Basho wrote his famous frog haiku, he was given a stone frog by one of his disciples. Basho treasures it so much that he placed it near his hermitage. With time, it was lost, but re-appeared after a typhoon in 1917. The local citizens, in honor of Basho, built a shrine at the location and dedicated it to Basho's spirit and to the god Inari. Unfortunately the shrine was burnt down during the WWII air raids, and was rebuilt in its present form in 1975. Replicas of the frog have also been placed around the shrine. Basho Inari Jinja Shrine has been designated historic site by the Tokyo Metropolitan Government.

Matsuo Basho Memorial Park
Just a few meters from the shrine is Matsuo Basho Memorial Park. This small park is an elevated one and is reached after climbing a short flight of rugged stone stairs. On reaching this terrace garden, one cannot but hold one's breath at the beautiful scene it offers of the river below with Kiyosu Bridge spanning it. In the center of the park is a bronze statue of Basho placed on top of a pedestal. All around are bamboo and banana trees and a large variety of other plants. Several Basho-themed sketches have also been placed around the park.

Matsuo Basho Museum
Matsuo Basho (1644-1694), born Matsuo Kinsaku, and also known by his samurai name of Matsuo Munefusa, was a travel writer and a poet of the early Edo period. He is best known as the poet who brought haiku to the level of an art. Basho originally lived in the nearby area of Fukagawa, but moved to Morishita in 1680 as he wanted a quieter place to write in. He made his hermitage, named Basho Iori Hermitage, in a place along Sumida River between Shin-Ohashi and Kiyosu Bridges. It is in this same hermitage that Matsuo Basho Museum is located.
The small Matsuo Basho Museum exhibits all materials and artifacts related to Basho and his writings. Of particular mention are the detailed maps that Basho used for his travels on foot in the then under-developed region of Honshu. The museum also serves as a literary center for research and regularly holds meetings on the art of haiku.
source : tokyo-tokyo.com/Morishita 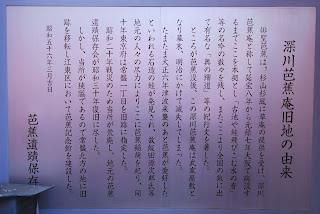 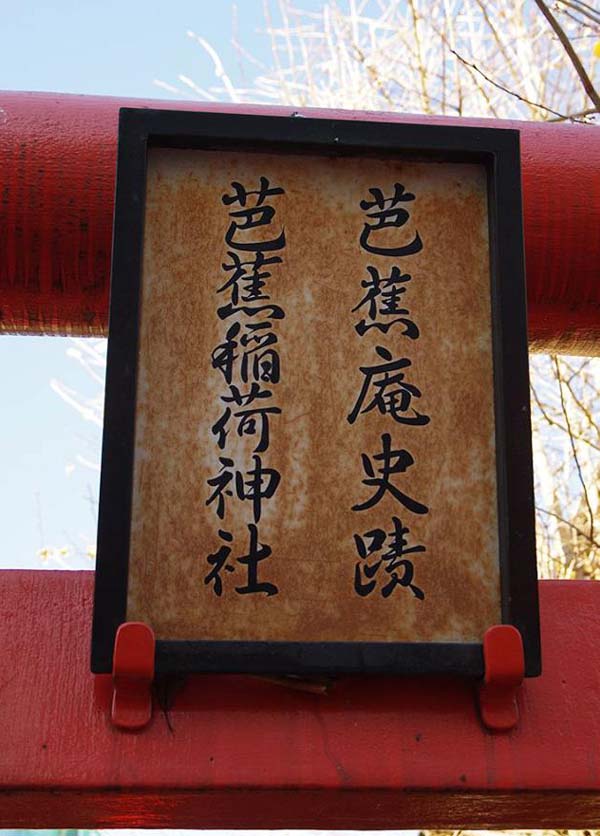 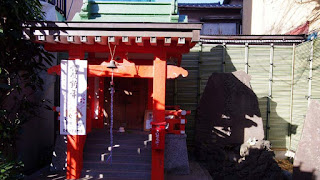 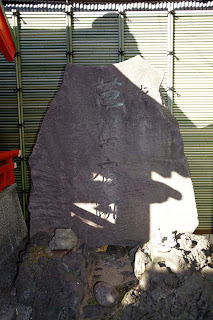 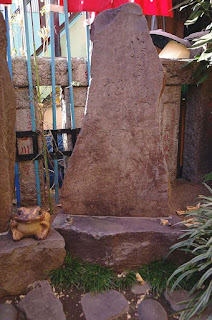 
quote
Walking the path of a legendary poet Depicting a legendary scene in which the poet was inspired to pen one of his masterpieces, Basho is seated at his writing desk in a humble cottage thatched with straw. A brushwood fence in the foreground on the right-hand side, moss-covered stepping stones in the garden, a pond overgrown with reeds, and stark surroundings suggested by thick horizontal lines in the background, all combine to conjure up the image of a hermit in seclusion from worldly concerns. Pausing in his work, the poet casts a glance at the pond and sees a frog leap into the water, creating ripples. This was the birth of his famous haiku:

“Listen! a frog,
Jumping into the stillness,
Of an ancient pond!”
(Translation by Dorothy Britton).
The print is completed with the poem written at the top.

In 1680, Basho moved to Fukagawa on the east bank of the Sumida River to escape the din and bustle of Nihonbashi, near the center of the city, where he had lived for nine years. In those days, Fukagawa was a sparsely populated piece of reclaimed land beyond the boundary of Edo City.

With no bridge yet built on the Sumida, boats plied busy waterways during the day, but early in the morning and evening silence prevailed in the area and Basho could hear the gongs of temple bells ringing in Ueno and Asakusa, 4 km away. Nearby was a Zen temple, Rinsen-ji, where he was admitted to practice meditation. The whole set-up was to his taste and met his needs so Basho made Fukagawa his base in Edo until his death in 1694. It was from here that he struck out on his many travels. (See this column, June 3, 2005).

He was especially pleased by a banana tree planted in the garden and used the plant name, basho, to call his cottage Basho-an. He also changed his pen name from Tosei to Basho. The plant, which had been introduced from China for medicinal purposes and to get fiber for weaving, was probably loved for the sound it made when raindrops pattered.

skip
For now, however, let us hurry to cross the bridge and look for Basho Inari-jinja shrine on a lane to the left. Though dedicated to Inari, the god of rice harvest and business prosperity, the shrine is a Tokyo Metropolitan Government-designated historic site that commemorates Basho’s abode.

As Basho moved twice within Fukagawa, and the whole area underwent drastic changes in land ownership in modern times, the exact locations of all the Basho-related sites were forgotten and became difficult to determine. However, when a large tsunami hit the area in 1917, a stone frog was discovered at this spot, suggesting the possibility that his last cottage stood here, especially as the poet had a fondness for the amphibian. Local citizens under the lead of Iida Gentaro 飯田源太郎 then decided to dedicate a shrine to his spirit as well as to the Inari god whose shrine was marked here on the old area map. As the original wooden building was burnt down by the 1945 air raids, they built a new one in concrete.

The poet is honored by another, more modern memorial nearby. At the end of the lane, a pocket-size park is tucked away behind a wooden gate and short flights of rugged stone steps. Ascending to an airy terrace on the very edge of the Sumida, visitors would hold their breath at the sight of Kiyosubashi Bridge straddling the broad expanse of the river water as boats passed by underneath it, with their white wakes. A bronze statue of Basho on a pedestal is installed at the center of the platform, surrounded by bamboo, banana trees and other plants that sway in the wind, as well as reproductions of Basho-themed old sketches. 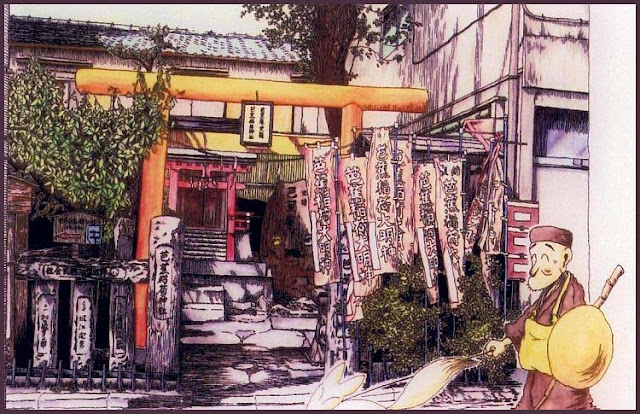