The Style of Basho

quote
Basho's hokku have been called a "poetry of nouns"
because of its tendency to rely primarily on image rather than statement.
We can look back at the Sado Island, crow on a withered branch, and old pond poems as examples.
In each case we have the same pattern of noun, noun-verb, noun.
Much of the dynamism of these poems is in the stark imagism that turning them into a statement would only dilute.
Barnhill


What is Basho's style?
His style evolved over his career, from the early Danrin school influence, through Genroku 'keiki' style with its Chinese influence, to his final 'karumi' style.

And as Blyth points out,
Basho could write from a lot of different points of view.

There is a theory that
Basho used more Chinese characters and nouns, writing about the Elite of Japan, whereas Issa used more hiragana and verbs, to talk about the human situation of his time.
. WKD : What is Basho's style? .

- - - - and Characteristics of Karumi
a) Kogo-kizoku
b) aikai-jiyu (freedom)
c) Karumi and Zen
d) Humour
e) Karumi's Pictorial Qualities
f) Karumi and Musical Qualities
Notwithstanding the validity of the generally-held view that Japanese poems usually lack the characteristics of Western prosody, musical qualities do play their part in them. In an extreme case, if a Japanese poem sounds monotonous to the Western ears, the Japanese hear 'their' music in that monotony.

Haikai is nothing but poetry.
Poetry needs no theory.


quote
Barnhill says that in his travels Basho pursued
“the wayfaring life in order to embody physically and metaphorically the fundamental character of the universe.”
He visits places “loaded” with cultural and spiritual significance and his sense of “nature” is bound up with these traditions of place. This intertwining of place and significance, the local and the transcendental, is basic to Basho’s experience.
The centrality of “place names” or utamakura is basic to Basho’s outlook. Barnhill says,
“Basho tended to write of places in nature handed down through literature, giving cultural depth to his experience of nature.”

Saigyo for waka, Sogi for linked verse,
Sesshu for painting, Rikyu in the tea ceremony —
- there is a single thread running through their art.
- the fundamental principle is the same.
- There is one thing that permeates.
- One thread unites them.
- one thread runs through the artistic Ways.

"Heels torn, I am the same as Saigyo, and I think of him at the Tenryu ferry. Renting a horse, I conjure up in my mind the sage who became furious. In the beautiful spectacles of the mountains, field, ocean and coast, I see the achievement of the creation.
Or I follow the trails left by those who, completely unattached, pursued the Way, or I try to fathom the truth expressed by those with poetic sensibility."

"In the beautiful spectacles of the mountains, field, ocean and coast, I see the achievement of the creation."

" I see the achievement of the creation. Or I follow the trails left by those who, completely unattached, pursued the Way, or I try to fathom the truth expressed by those with poetic sensibility."

Basho and His Interpreters: Selected Hokku with Commentary
by Makoto Ueda

The following list of sixty-four (64) of the two-hundred-fifty-six (256) hokku translations by Ueda stand out for their emphasis on the verbs or have one or more lines in a verse ending with a verb. They are 25% of the book’s translated hokku.

The following list of sixty-four (64) of the two-hundred-fifty-six (256) hokku translations by Ueda stand out for their emphasis on the verbs or have one or more lines in a verse ending with a verb. They are 25% of the book’s translated hokku.

*Note that all of the Basho hokku presented in the book use verbs in their normal context. None stretch the meaning for the sake of novelty or added surprise.

To “go beyond formal rules and forget conceptual principles” is to eliminate the subjective and conceptual consciousness.
It has been noted that “forgetting” was the mental state Bashô pursued in his old age, and he believed that this mental state was essential to achieve karumi.
In a haibun written one year before his death, Bashô says:

"People who lack wisdom have a lot of thoughts.
People who excel in an art due to worldly concerns are also good at distinguishing “right” and “wrong.”
Holding the “right” as their way to live, their hearts suffer in the hell of desires, and, drowned in these shallow ditches, they cannot produce true art. I would say following the old immortal Nanhua’s words to do away with fame and profit, to forget years, and to be in idleness — this is the happiness of my old age.

To “forget years” is an allusion to the second chapter of the Zhuangzi. It implies a mental preparation for attaining the Dao.

In Chinese literature, the term “forget” is used in both epistemological and spiritual ways. When designating a spiritual realm, “forget” (C. wang; J. wasure) suggests the elimination of worldly concerns. As seen in earlier chapters, doing away with fame and profit and forgetting worldly worries are major themes in Bashô’s work.

Yet the importance of “forgetting” in haikai theory, as Bashô accentuated increasingly in his later writings, lies in its epistemological implication: forgetting as a primary way to enter emptiness and limitlessness, the ideal state in which to attain the Dao.
source : Basho-and-the-Dao - Peipei-Qiu 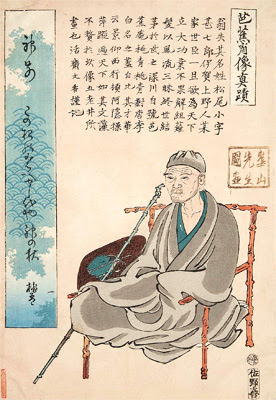