Yoshino valley is famous for its three thousand or maybe more cherry trees, in the three lower, middle and upper levels of the valley.
Yoshino is also an old center of spiritual assertion, with the fierce deity Zao Gongen 蔵王権現 at its center. 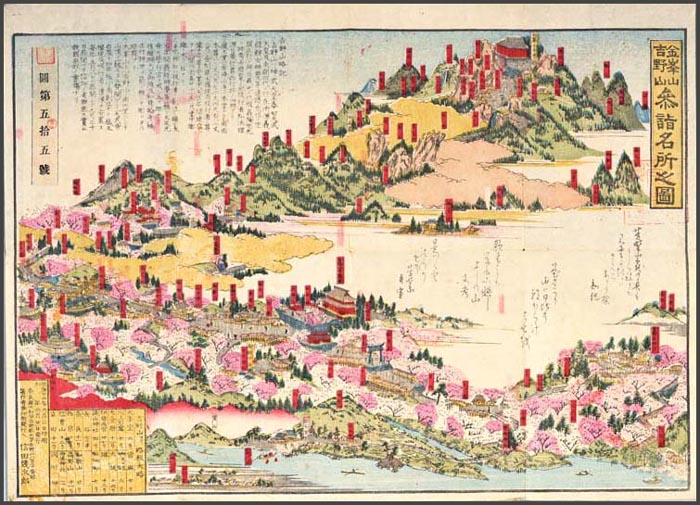 The following hokku by Basho are explained in this link:

Basho visited Yoshino during his "Weatherbeaten Trip" in 1684 - 84.

He describes the small huts of the forest workers and the echo of the temple bells.
To him it looked like the famous Mount Lu in China.
At one temple, where he spent the night, he wrote the following hokku:

pounding cloth
for me to hear ...
the wife of the priest

dew trickles down:
in it I would try to wash away
the dust of the floating world
Tr. Barnhill 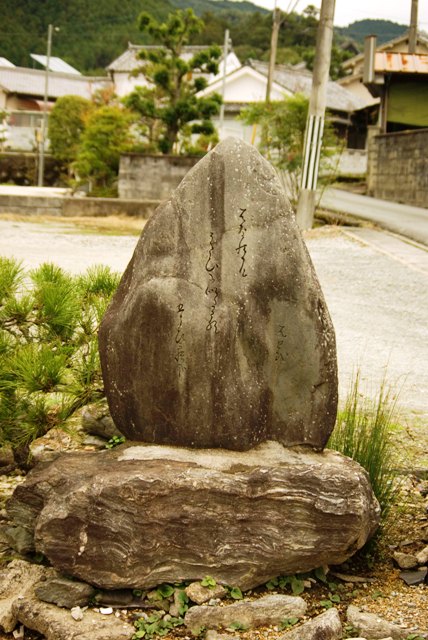 On a journey,
Resting beneath the cherry blossoms,
I feel myself to be in a Noh play.
Tr. Takase


in the blossom’s shade
as in the no drama
a traveler sleeps
Tr. Ueda


Written in 1688, Basho stayed at Hirao Village 平尾村.
utai here refers to a famous Noh song 謡曲 (yookyoku) about "Futari Shizuka" 二人静.
While Basho enjoys to sleep on his travels, he is reminded of the tragic story of Shizuka and Yoshitsune.


MORE - hokku about tabine, sleeping on the road whilst travelling
. Matsuo Basho 松尾芭蕉 - Archives of the WKD . 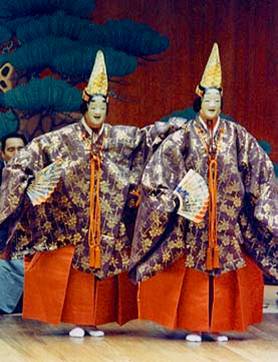 futari shizuka 二人静 (ふたりしずか)
This is also the name of a plant, Chloranthus serratus, and a kigo for late spring.


quote
Futari Shizuka (二人静) - play attributed to Zeami
One early spring a Priest from Yoshino stood along the banks of the Natsumi River. It was the seventh day of the first month and he was watching over the women as they were plucking new shoots for the Festival of Young Herbs. He had called his Servant to him and instructed him to gather everyone up, since it was getting late in the day. One Village Woman malingered in returning, and the Servant scolded her for it.
- snip -
The Priest was shocked. Had the poor Village Woman lost her mind? Suddenly realizing that she had become possessed, he begged the spirit to speak its true name so he might better pray for them. Who are you, he said? One who served Yoshitsune replied the possessing spirit. Might you be Kanefusa, Yoshitsune’s loyal friend, asked the Priest?

Kanefusa was indeed a loyal vassal, said the possessing spirit, but I am not him. He ended his own life after the death of Yoshitsune, setting fire to the mansion and dying in the blaze. I am not he; in truth I am a woman and accompanied Yoshitsune as far as he would allow it. The sleeves of my robe are soaked with the endless tears of my love and devotion for him. It was beyond the possessing spirit’s ability to even speak her own name aloud.

Might you be the Lady Shizuka, asked the Priest?
If so, then you were well known for the beauty of your dance. Please, dance for us now, and I will pray for your release from this world with an open heart. It is true, I loved to dance, she said, and I had made an offering of my dancing robes to the Katte shrine before my departure.

If you are truly Shizuka, said the Priest, then what color were your robes?
The hakama were deepest azure, made of raw silk and striped with gloss, and the jacket was covered in flowers like the fields of autumn. The Priest looked in the shrine treasury, and behold, the dancing robes were just as the spirit of Lady Shizuka had described. Please, he said, put on these robes and dance for us. Gathering his attendants they watched, enraptured, as the possessed Young Woman donned Lady Shizuka’s robes.

From out of the gathering darkness, the spirit of Lady Shizuka appeared. Now there were two Shizuka Gozen, one spectral and living! They faced each other in their fine robes and recounted the tale of Yoshitsune’s flight:
- snip -
After Yoshitsune’s departure by his own hand, the Lady Shizuka had been summoned before Yoritomo. In her womb was Yoshitsune’s unborn son. Dance for me, Yoritomo declared; show me your renowned skills! With broken heart, and terrible longing she danced against her own desires, her soul overcome with bitterness.

The two Lady Shizuka’s danced slowly, their sleeves gracefully sweeping the ground, almost but not quite touching, almost but not quite intertwined. There was an old poem about love, about wishing that there was a way to make the past into the present – but for Shizuka the past brought only sadness. For her unhappiness was surely the only unchanging thing in this transient world.


When Shizuka 静 had to leave the Yoshino mountains, because she was pregnant and could not proceed in the harsh mountain roads, she wrote the following poem and then went to Kamakura:

even if I look into the mirror, I do not feel happy
because it does not show the man I love


Her man, Yoshitsune, and his vassal, the strongman Benkei 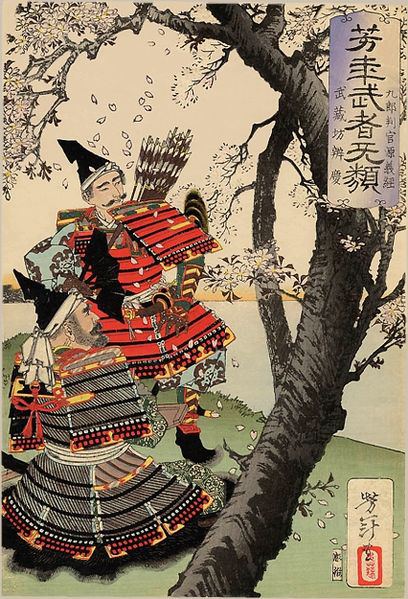 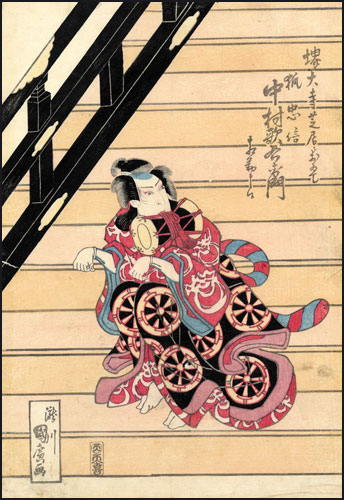 Yoshitsune Senbon Zakura (義経千本桜)
Yoshitsune and the Thousand Cherry Trees,
is a Japanese play, one of the three most popular and famous in the Kabuki repertoire.
- - - More in the WIKIPEDIA ! 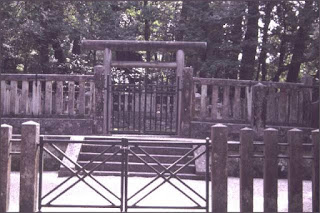 On the way down from Yoshino mountain Basho passed this mausoleum and the temple Nyoirin-ji.

This is a pun with the word SHINOBU.

blossoms at their peak,
with the mountains as always
at daybreak
Tr. Barnhill


ほろほろと山吹散るか滝の音
. horo horo to yamabuki chiru ka taki no oto .
at the waterfall Nijkoo no Taki 西河の滝 Nijiko no Taki.

quote
In fact, Bashô often avoids writing a poem at the most famous sites in his travel accounts. Oi no kobumi tells us that at Yoshino, known for the most beautiful views of cherry blossoms in Japan, the poet
“was unable to find proper language to compose a poem, hence, kept silent.”