source : Haruo Shirane
Japan and the Culture of the Four Seasons:
Nature, Literature, and the Arts 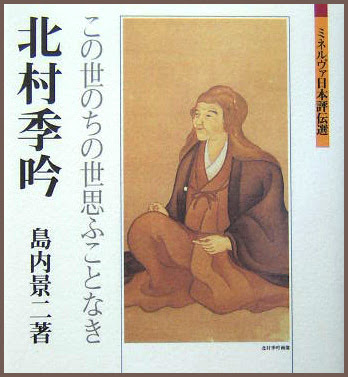 Kigin 季吟 was the haikai master and teacher of Matsuo Basho.

I assume that Basho and other disciples of Kigin studied these words in depth and knew all these kidai by heart after about one year (going through the four seasons) of their apprenticeship. After that time of study they passed the knowledge on to their own disciples.

Since seasonal references play an important role in the linked verse RENKU 連句, a haikai master like Basho had a lot to teach to his disciples.

The kigo used by Basho are usually marked in the ABC index of this archive.
Check the tabs on the right.

- - - - - (For now) I prepared three special Basho SAIJIKI , they comprise also most of the cultural keywords that also figure as kidai:

Here I will add a few more summaries of hokku by Basho with a certain kigo.


In the pre-Meiji era (before 1868), almost all hokku/haiku contained a kigo.
For example,
Japanese experts have classified
only 10 of Matsuo Bashō's hokku in the miscellaneous (zō) category
(out of about 1,000 hokku).
The kigo saijiki KIGOSAI lists 1031 hokku, three of them have no kigo.
Other poems of the 5 7 5 type by Basho appeared in the middle part of a renku or kasen, where no season word was required.
They would not be seen as HOKKU 発句 - first KU in a linked verse - in his time. (see below, zappai).


The fifth season of "New Year" had not been invented yet, since the Asian lunar calendar determined the seasons.
"First Spring" was the New Year's Day or New Year's season, which lastet 15 days until the full moon of the first lunar month.
. WKD : The Haiku Seasons - then and now .

This trend has been going on in our times, where modern words like "airconditioning" become a kigo as soon as a haiku poet makes use of the word in his poem.

On the other hand cultural kigo of the daily life popular in the Edo period have become obsolete, as the items themselves are not used any more.
This gives birth to even more saijiki to broaden our knowledge and understanding :

Japan and the Culture of the Four Seasons
source : www.amazon.com


Below are relevant excerpts from Haruo Shirane's new book, Japan and the Culture of the Four Seasons: Nature, Literature, and the Arts:

One of the major reasons for the prominence of nature and the four seasons in Japanese literary and visual culture is the impact of Japanese poetry, particularly the thirty-one-syllable waka (classical poetry), the main literary genre of the premodern period. Indeed, all the major types of Japanese poetry -- kanshi (Chinese-style poetry), waka, renga (classical linked verse), and haikai (popular linked verse) -- use natural themes extensively.

Even those poems that appear on the surface to describe only landscape or nature serve to express particular emotions or thoughts. Japanese poetry rarely uses overt metaphor (for example, 'My love is a rose.'). Instead, the description of a flower, a plant, an animal, or a landscape became an implicit description of a human or an internal state.

Metonymy, especially the construction of a larger scene from a small detail, also played a crucial role, particularly in short forms like waka and seventeen-syllable hokku (opening verse of renga sequence). From the perspective of the reader, all such poetry will potentially have a surface (literal) meaning and a deeper meaning. Representations of nature in aristocratic visual culture -- whether painting, poetry, or design --- are thus seldom simply decorative or mimetic; they are almost always culturally and symbolically encoded, and that encoding tends to evolve with time and genre.

Each seasonal topic generated a cluster of associations, and the seasons (along with famous poetic places) developed associative clusters that became part of a cultural vocabulary.

The highly encoded system of seasonal representation created by poetry provided an enduring foundation for an increasingly complex and multilayered view of the four seasons.

In a country in which little original wilderness survives, reconstructed nature -- in the form of replanted forests, cultivated gardens, famous places (meisho), and shrinesand temple grounds -- has contributed to the greening of both the countryside and the urban environment. For city dwellers, who make up the vast majority of the population, representations of nature . . . raise awareness of the seasons . . . Although nature may be far away, it is relived or recaptured in the cultural imagination.

The pervasiveness of secondary nature in Japanese culture has often been mistaken for a closeness to or a belief in Japanese harmony with nature.
- source : neverendingstoryhaikutanka.blogspot.jp


From this BLOG, entries with the lable KIGO
. Basho Archives - KIGO entries .

quote - Richard Gilbert
After haiku became a fully independent genre, the term "kigo" was coined by Otsuzi Ōsuga (1881-1920) in 1908.
"Kigo" is thus a new term for the new genre approach of "haiku."
So, when we are looking historically at hokku or haikai stemming from the renga tradition, it seems best to use the term "kidai."

Bashō regards kidai as a way to commune with the creative power of nature (zōka). Bashō does not regard kidai as a rule, but rather as a word or keyword establishing a relationship with kokoro (heart, mind). Kaneko Tohta paraphrases: “Bashō said to his disciples, ‘find kidai for yourself. If you are unable to do this, you cannot become a good haikaishi (haiku poet).’” Importantly, this is not because kidai is primary in itself, but rather that without finding an expression of language which unites Self with zōka, one cannot achieve a deep sense of heart (i.e. knowing).

Basho also has said, “Even if the word is not traditional kidai, in the case that the word has enough quality to be kidai, do choose it and use it. When you find a new kidai, it will be a great gift for the next generation” (Kyoraishō)."