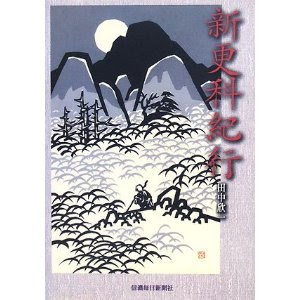 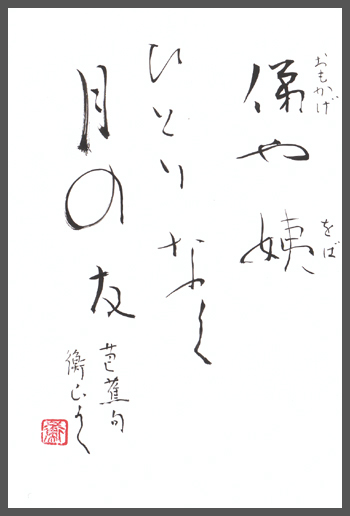 
"An Account of the Moon at Mount Obasute in Sarshina"

Sarashinayama さらしなやま【更科山】
is the old name of a mountain in Nagano prefecture,
now called Kamurikiyama 冠着山. It is 547 meters high.

A yellow valerian
With its slender stalk
Stands bedecked
In droplets of dew.
Tr. Yuasa 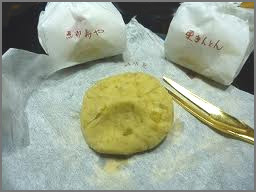 manju sweets made from Kiso chestnuts

chestnuts from Kiso
as souvenirs for those
of the floating world . . .

The chestnuts of Kiso were famous. The poor farmers used to prepare the horse chestnuts in a way to make mochi ricecakes out of them to have some food in the winter months. This was also a souvenir at the time of Basho.
source : itoyo/basho 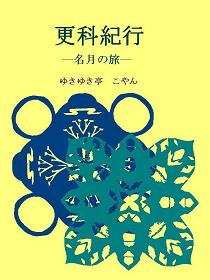 A Visit to Sarashina Village

The autumn wind inspired my heart with a desire to see the rise of the full moon over Mount Obasute. That rug­ged mountain in the village of Sarashina is where the villagers in the remote past used to abandon their ageing mothers among the rocks. There was another man filled with the same desire, my disciple, Etsujin, who accompanied me, and also a servant sent by my friend Kakei to help me on the journey, for the Kiso road that led to the village was steep and dangerous, passing over a number of high mountains. We all did our best to help one another, but since none of us were experienced travellers, we felt uneasy and made mistakes, doing the wrong things at the wrong times. These mistakes, however, provoked frequent laughter and gave us the courage to push on.

At a certain point on the road, we met an old priest - probably more than sixty years of age - carrying an enor­mously heavy load on his bent back, tottering along with short, breathless steps and wearing a sullen, serious look on his face. My companions sympathized with him, and, taking the heavy load from the priest's shoulders, put it to­gether with other things they had been carrying on my horse. Consequently, I had to sit on a big pile. Above my head, mountains rose over mountains, and on my left a huge precipice dropped a thousand feet into a boiling river, leaving not a tiny square of flat land in between, so that, perched on the high saddle, I felt stricken with terror every time my horse gave a jerk.

We passed through many a dangerous place, such as Kakehashi, Nezame, Saru-ga-baba, Tachitoge, the road always winding and climbing, so that we often felt as if we were groping our way in the clouds. I abandoned my horse and staggered on my own legs, for I was dizzy with the height and unable to maintain my mental balance from fear. The servant, on the other hand, mounted the horse, and seemed to give not even the slightest thought to the danger. He often nodded in a doze and seemed about to fall headlong over the precipice.

Every time I saw him drop his head, I was terrified out of my wits. Upon second thoughts, however, it occurred to me that every one of us was like this servant, wading through the ever-changing reefs of this world in stormy weather, totally blind to the hidden dangers, and that the Buddha surveying us from on high, would surely feel the same misgivings about our fortune as I did about the servant.

When dusk came, we sought a night's lodging in a humble house. After lighting a lamp, I took out my pen and ink, and closed my eyes, trying to remember the sights I had seen and the poems I had composed during the day. When the priest saw me tapping my head and bending over a small piece of paper, he must have thought I was suffering from the weariness of travelling, for he began to give me an account of his youthful pilgrimage, parables from sacred sutras, and the stories of the miracles he had witnessed.

Alas, I was not able to compose a single poem because of this in­terruption. Just at this time, however, moonlight touched the corner of my room, coming through the hanging leaves and the chinks in the wall. As I bent my ears to the noise of wooden clappers and the voices of the villagers chasing wild deer away, I felt in my heart that the loneliness of autumn was now consummated in the scene.

I said to my companions. 'Let us drink under the bright beams of the moon,' and the master of the house brought out some cups. The cups were too big to be called refined, and were deco­rated with somewhat uncouth gold-lacquer work, so that over-refined city-dwellers might have hesitated to touch them. Finding them in a remote country as I did, however, I was pleased to see them, and thought that they were even more precious than jewel-inlaid, rare-blue cups.

Seeing in the country
A big moon in the sky,
I felt like decorating it
With gold-lacquer work. - - - - - ano naka ni maki e kakitashi yado no tsuki


On to a bridge
Suspended over a precipice
Clings an ivy vine,
Body and soul together. - - - - - kakehashi ya inochi o karamu tsuta katsura


Ancient imperial horses
Must have also crossed
This suspended bridge
On their way to Kyoto. - - - - - kakehashi ya mazu omoi-izu uma mukae


Halfway on the bridge,
I found it impossible
Even to wink my eye,
When the fog lifted.
(by Etsujin)


A poem composed at Mount Obasute:

In imagination,
An old woman and I
Sat together in tears
Admiring the moon. - - - - - omokage ya oba hitori naku tsuki no tomo

The moon is already
Sixteen days old,
And yet I linger In
Sarashina Village. - - - - -izayoi mo mada Sarashina no koori kana


Three days have passed,
And three times I have seen
The bright moon
In the cloudless sky.
(by Etsujin)

A yellow valerian
With its slender stalk
Stands bedecked
In droplets of dew. - - - - - hyorohyoro to nao tsuyukeshi ya ominaeshi

Horse-chestnuts
From the mountains of Kiso
Will be my presents
To city-dwellers. - - - - - Kiso no tochi ukiyo no hito no miyage kana

A poem composed at Zenkoji Temple:


A sudden storm
Descends on Mount Asama,
Blowing stones
All over me. - - - - - fukitobasu ishi wa Asama no nowaki kana 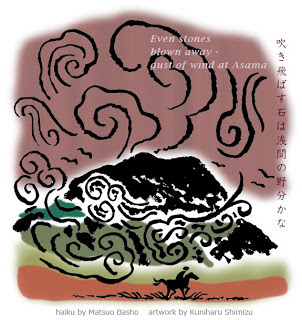 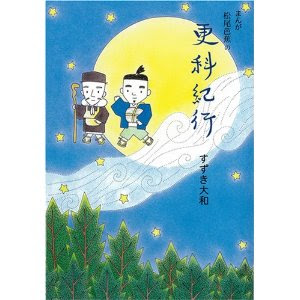 
The Sarashina Diary
A Woman's Life in Eleventh-Century Japan 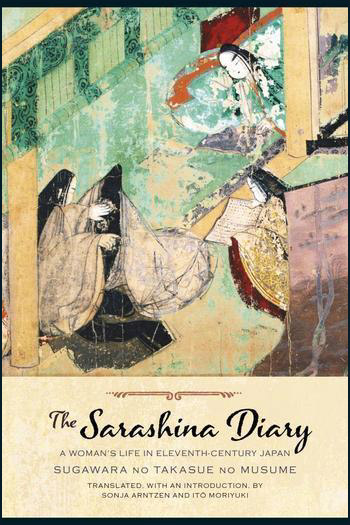 A thousand years ago, a young Japanese girl embarked on a journey from the wild East Country to the capital. She began a diary that she would continue to write for the next forty years and compile later in life, bringing lasting prestige to her family.

Some aspects of the author's life and text seem curiously modern. She married at age thirty-three and identified herself as a reader and writer more than as a wife and mother. Enthralled by romantic fiction, she wrote extensively about the disillusioning blows that reality can deal to fantasy. The Sarashina Diary is a portrait of the writer as reader and an exploration of the power of reading to shape one's expectations and aspirations.

As a person and an author, this writer presages the medieval era in Japan with her deep concern for Buddhist belief and practice. Her narrative's main thread follows a trajectory from youthful infatuation with romantic fantasy to the disillusionment of age and concern for the afterlife; yet, at the same time, many passages erase the dichotomy between literary illusion and spiritual truth. This new translation captures the lyrical richness of the original text while revealing its subtle structure and ironic meaning. The introduction highlights the poetry in the Sarashina Diary and the juxtaposition of poetic passages and narrative prose, which brings meta-meanings into play. The translators' commentary offers insight into the author's family and world, as well as the fascinating textual legacy of her work.
- source : cup.columbia.edu/book -

Mount Sarashina is another name for Ubasute or Obasute: a mountain in Issa's home province of Shinano (today's Nagano Prefecture) where old people were, according to legend, "thrown away": left to die. Today it is called Kamurikiyama.
Bashô visited Sarashina Village in 1688, writing in his Visit to Sarashina Village (Sarashina kikô).

the lord of Sarashina's
buckwheat fields...
pounding cloth at night

In Japan and Korea, fulling-blocks were used to pound fabric and bedding. The fabric was laid over a flat stone, covered with paper, and pounded, making a distinctive sound.
Though he lords over fields of "buckwheat" (soba), the landowner, too, must dry his clothes.

"My love
is at Mount Sarashina!"
the goose departs

geese fly north--
how they yearn to see
Mount Sarashina

sarashina no soba no aruji ya sayo-ginuta

night in Sarashina --
fulling cloth for the owner
of a buckwheat farm
Tr. Chris Drake

This hokku was written on 7/28 (Sept. 13) in 1803, when Issa was living in and around Edo. Issa seems to have been thinking hard about Sarashina, an area not far from his hometown, and after a long visit to his hometown two years earlier, a visit during which his father had died, he had begun to seriously want to return to his rural Shinano province to live. Buckwheat for making soba or buckwheat noodles was grown in the area around Issa's hometown, but some of the most delicious buckwheat noodles in all of Japan were grown a few miles to the south in an area called Sarashina. Noodles made from Sarashina buckwheat were extremely popular in the big city of Edo, so Issa no doubt ate Sarashina noodles often while he was living in Edo.

In the hokku the volume of the sound of cloth being fulled at night seems to indicate that it comes from the house of the owner of a big buckwheat farm in Sarashina. Fulling was a method of pressing recently washed clothing and other cloth by striking the cloth with large round wooden mallets as the cloth was slowly wound around a wooden roller. A simpler method was simply to beat the cloth on a wooden block or low table. Striking the cloth not only got rid of wrinkles and tightened the fibers of the fabric, it also gave cloth an attractive sheen. Usually two women struck the cloth and kept to a steady 1-2 beat. The mallets produce a fairly loud smack-smacking sound in the night, a sound that was often associated with loneliness, especially with the loneliness of a traveler trying to tell where s/he was by the sounds of fulling mallets out in the darkness.

In this hokku, however, Issa seems to be evoking a non-traditional fulling sound. One of the few ways to become rich in rural Sarashina was to become a big buckwheat farmer or a wholesaler who delivered the local flour to restaurants and individuals in Edo and other cities. Perhaps the rich farmer in Issa's hokku also grinds and sells his own flour. In any case, he no doubt lives in a big house, and he and his wife probably have many fancy clothes, so in his house fulling is no ordinary chore. A group of servants must beat on several fulling rollers or blocks until late in the evening to get the job done. The stream of slap-slapping sounds is so loud and steady that people who hear it know right away that it's coming from the farm owner's house.