Crossing the River Natori, I entered the city of Sendai on May the fourth, the day we customarily throw fresh leaves of iris on the roof and pray for good health. I found an inn, and decided to stay there for several days. There was in this city a painter named Kaemon. I made special efforts to meet him, for he was reputed to be a man with a truly artistic mind. One day he took me to various places of interest which I might have missed but for his assistance. We first went to the plain of Miyagino, where fields of bush-clover were waiting to blossom in autumn. The hills of Tamada, Yokono, and Tsutsuji-ga-oka were covered with white rhododendrons in bloom. Then we went into the dark pine woods called Konoshita where even the beams of the sun could not penetrate. This darkest spot on the earth had often been the subject of poetry because of its dewiness - for example, one poet says that his lord needs an umbrella to protect him from the drops of dew when he enters it.

We also stopped at the shrines of Yakushido and Tenjin on our way home.

When the time came for us to say good-bye, this painter gave me his own drawings of Matsushima and Shiogama and two pairs of straw sandals with laces dyed in the deep blue of the iris. In this last appears most clearly perhaps the true artistic nature of this man.

It looks as if
Iris flowers had bloomed
On my feet --
Sandals laced in blue.


In 1689 Matsuo Basho (松尾芭蕉) crossed the Natori River and entered Sendai, Miyagi on ‘ The Narrow Road to Oku.’ It was the day they celebrate by converting their roofs with ‘Sweet flags’, or Calami’ (あやめ). He visited there around the time of the Sweet Flags Festival (あやめの節句)(5th day of Fifth Month, also called the Boy’s Festival), when sweet flags were displayed on the eaves of houses to drive away evil spirits, or they took “Shobuyu, or 菖蒲湯 (bath with floating sweet flag leaves)” baths. The leaves keep mosquitoes and snakes away with strong fragrance. As the strong fragrance was believed to drive away bad air, people began to take baths with sweet flag leaves.
Furthermore, the plant ‘Sweet Flag’ was believed to be a symbol of the samurai’s bravery because of its sharp sword-like leaves. Even now many families with young boys enjoy “Sweet Flag Bath(shobu yu)” in the Boy’s Festival on May 5.
source : Akita Haiku 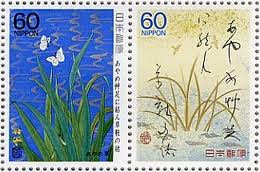 irises in bloom
let me tie around my feet
the cords of the sandals
Tr. cirje/research


I will bind iris
Blossoms round my feet―
Cords for my sandals!
Tr. Keene


I shall tie
irises to my feet -
sandal thongs

Grass of the sweet flag -
I shall use them to tie
my straw sandals
Tr. Shirane


quote
In Sendai ... he hoped to meet Michikaze (1649 - 1707), a prominent haikai master who had developed a considerable following in the area, but Michikaze was absent, leaving only Kae'mon (d. 1765), one of Michikaze's disciples, who appears .. as the eccentric painter.
- Shirane, Traces of Dreams, p. 250
source : books.google.co.jp


On the 8th day of the 5th lunar month 5月8日 Basho left Sendai and arrived in Shiogama around 3 in the afternoon. After eating some rice 茶漬け he visited some of the famous places of the town, like Sue no Matsuyama.
Next morining he was back in Sendai at the home of Kaemon 加右衛門.

. Basho at Tsubo no Ishibumi 壺の碑 .

quote
Like fûga, fûryû is one of many Chinese-origin words Bashô uses frequently in his work. In “Sansei zu san” (Eulogy on the painting of the Three Sages), a short haibun piece written in his later years, he writes:
“A person who puts his whole heart into fûryû and harmonizes himself with the four seasons would find the things worthy of verse as inexhaustible as the grains of sand on the beach.”

In this passage, fûryû seems to refer to poetry in general and is almost interchangeable with fûga. More often, however, Bashô uses fûryû to describe a quality or taste that is closely associated with the life and spirit of a recluse/wayfarer.
In Oku no hosomichi, for example, Bashô writes about his visit to a painter at Sendai. He tells us that when the time came for him to leave, the painter gave him some drawings and two pairs of straw sandals with their laces dyed deep blue. Bashô comments on the sandals:
“It was with the last gifts that he demonstrated most clearly his character as a connoisseur of fûryû.”

It is noteworthy here that the poet does not pay much attention to the beautiful drawings of famous landscapes, but rather stresses the artist’s taste of fûryû as demonstrated in the sandals he gave to the traveler, objects that are often associated with rusticity and a wayfarer’s life. The interesting example above reveals that the taste and lifestyle of a recluse/traveler was a basic element of Bashô’s fûryû.