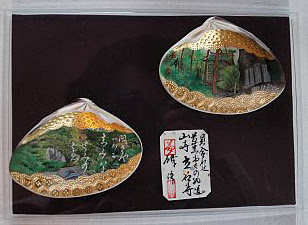 There was a temple called Ryushakuji in the province of Yamagata.
Founded by the great priest Jikaku, this temple was known for the absolute tranquility of its holy compound. Since everybody advised me to see it, I changed my course at Obanazawa and went there, though it meant walking an extra seven miles or so. When I reached it, the late afternoon sun was still lingering over the scene. After arranging to stay with the priests at the foot of the mountain, I climbed to the temple situated near the summit. The whole mountain was made of massive rocks thrown together and covered with age-old pines and oaks. The stony ground itself bore the color of eternity, paved with velvety moss. The doors of the shrines built on the rocks were firmly barred and there was no sound to be heard. As I moved on all fours from rock to rock, bowing reverently at each shrine, I felt the purifying power of this holy environment pervading my whole being.

In the utter silence
Of a temple,
A cicada's voice alone
Penetrates the rocks.

This temple is said to have been founded by Jikaku Daishi in 860 on orders from the Emperor Seiwa after Jikaku had completed his studies in China and returned to Japan. . shizukesa ya iwa ni shimi-iru semi no koe .
Discussion of this hokku.

Basho makes skillful use of the III sounds, iwa ni shimi-iru semi, imitating the semi calls. This shows his great skill with the choice of words, sounds and the language.

The Yamadera Basho Memorial Museum (山寺芭蕉記念館, Yamadera Bashō Kinenkan)
was established in 1989 as part of the cultural building boom in Yamagata celebrating the 100 year anniversary of the founding of the city. Located about 20 minutes by train (Senzan Line between Yamagata and Sendai) from Yamagata Station, it sits on the south side of the steep river valley facing Yamadera to the north, the historic temple founded in 860 which is one of the area's most beloved sacred sites and top sightseeing destinations.

The Museum focuses on the life of Matsuo Bashō (1644–1694) who perfected the art of haiku, the concise 5-7-5 syllable verse form now appreciated and written around the world. Many treasures from Basho's own hand and writing brush are regularly displayed, along with works of literati and artists from his time, and of those who followed later. Special exhibitions on related themes are also regularly mounted in the gallery.
© More in the WIKIPEDIA ! 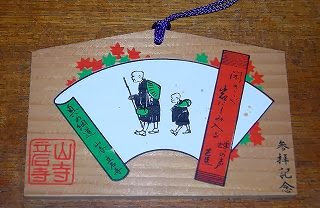 How tranquil it is!
Penetrating into the rocks
the sound of cicadas.

This poem appears to be strictly about nature: no trace of man is found in the tableau to disturb the profound tranquility of the universe. Yet there is obviously a beholder, through whose senses the eternal tranquility is observed, internalized, and expressed. The opening phrase, in particular, conveys the beholder’s admiration of the landscape with an emphatic cutting word (kireji) “ya.”
“Shizukasa ya” is derived from shizuka, an adjective that means quiet, still, or tranquil. The word is commonly written with a kanji character whose Chinese-origin reading is “sei,” but in this verse Bashô uses a different kanji whose Chinese-origin reading is “kan,” meaning “leisure” or “idle.” The implications of the latter kanji, as we have seen earlier, are highly valued by Daoist thinkers, and Bashô’s choice is not a coincidence. Textual studies show that this poem has gone through careful revisions.

A mountain temple—
seeping into the stones,
the sound of cicadas.

This version seems to be more “impersonal.” Comparing this verse with the earlier one, it is clear that the revision was more intended to convey the poet’s perception of the stillness of the landscape, as Bashô describes in the prose preceding the poem:
“Wandering along the coast, climbing the rocky mountains, and visiting Buddhist temples—the profound tranquility of the beautiful landscape penetrated deeply into my heart.”

By carefully choosing a kanji whose connotations are celebrated in the Daoist texts to transliterate the word “shizukasa,” Bashô expresses simultaneously the tranquility of the external world and the carefree serenity of the speaker’s mind, presenting not only a picture of the landscape but also an aesthetic evaluation of it, one informed by Daoist discourse. This aesthetic landscape embodies the beholder’s attitude toward the world, and it is in this landscape that the poetic self merges into zôka. It is worth noting that, besides the two drafts cited above, the cicada poem has another version that opens with a different word, “sabishisa” rather than “shizukasa.”

How solitary it is!
Permeating into the rocks—
the sound of cicadas.

“Sabishisa,” a word derived from the adjective “sabishi,” conventionally implies loneliness in Japanese literature. Bashô, however, often uses the word in close relationship with “shizuka.”

三郎諏方 Saburo Sugawara (former 甲賀三郎 Koga Saburo) became the regent of Yamato.
There he married 春日姫 Kasuga Hime.
Once when he was away his wife was kidnaped by a Tengu.
So he gave up his position and went to search her.
. Tengu 天狗と伝説 Tengu legends "Long-nosed Goblin" .
立石寺観音堂の縁起

- quote -
Kōga Saburō (甲賀三郎)
is a character in Japanese folklore associated with the Suwa region.
Many variants on the basic story exist; the following summary is based on the earliest literary version of the tale found in the Shintōshū.
The third son of a local landlord of Kōka District in Ōmi Province, a distinguished warrior named Kōga Saburō Yorikata (甲賀三郎諏方) was searching for his lost wife, Princess Kasuga (春日姫 Kasuga-hime) in a cave in Mount Tateshina in Shinano, with his two elder brothers.
The second brother, who was jealous of Saburō's prowess and fame and who coveted Kasuga, traps the latter inside the cave after they had rescued the princess.
With no way out, Saburō has no other choice but to go deeper into the cave, which was actually an entrance to various underground realms filled with many wonders. After travelling through these subterranean lands for a long period of time, he finally finds his way back to the surface, only to find himself transformed into a giant snake or dragon.
With the help of Buddhist monks (who turn out to be gods in disguise), Saburō regains his human form and is finally reunited with his wife. Saburō eventually becomes Suwa Myōjin, the god of the Upper Shrine of Suwa, while his wife becomes the goddess of the Lower Shrine.
This version of the legend explains the origin of the name 'Suwa' (諏訪 or 諏方) via folk etymology as being derived from Saburō's personal name, Yorikata (諏方).
- - - More in the WIKIPEDIA !