Exhausted by the labor of crossing many dangerous places by the sea with such horrible names as Children-desert-parents or Parents- desert-children, Dog-denying or Horse-repelling, I went to bed early when I reached the barrier-gate of Ichiburi. The voices of two young women whispering in the next room, however, came creeping into my ears. They were talking to an elderly man, and I gathered from their whispers that they were concubines from Niigata in the province of Echigo, and that the old man, having accompanied them on their way to the Ise Shrine, was going home the next day with their messages to their relatives and friends.

I sympathized with them, for as they said themselves among their whispers, their life was such that they had to drift along even as the white froth of waters that beat on the shore, and having been forced to find a new companion each night, they had to renew their pledge of love at every turn, thus proving each time the fatal sinfulness of their nature. I listened to their whispers till fatigue lulled me to sleep.

When, on the following morning, I stepped into the road, I met these women again. They approached me and said with some tears in their eyes, 'We are forlorn travellers, complete strangers on this road. Will you be kind enough at least to let us follow you? If you are a priest as your black robe tells us, have mercy on us and help us to learn the great love of our Savior.' 'I am greatly touched by your words,' I said in reply after a moment's thought, 'but we have so many places to stop at on the way that we cannot help you. Go as other travellers go. If you have trust in the Savior, you will never lack His divine protection.' As I stepped away from them, however, my heart was filled with persisting pity.

Under the same roof
We all slept together,
Concubines and I -
Bush-clovers and the moon.

As I recited this poem to Sora, he immediately put it down on his notebook.

Crossing the so-called forty-eight rapids of the Kurobe River and countless other streams, I came to the village of Nago, where I inquired after the famous wisteria vines of Tako, for I wanted to see them in their early autumn colors though their flowering season was spring. The villagers answered me, however, that they were beyond the mountain in the distance about five miles away along the coastline, completely isolated from human abode, so that not a single fisherman's hut was likely to be found to give me a night's lodging. Terrified by these words, I walked straight into the province of Kaga.

I walked into the fumes
Of early-ripening rice,
On the right below me
The waters of the Angry Sea.

in the same house
prostitutes, too, slept:
bush clover and moon
Tr. Barnhill


Robert Hass, in his discussion of this hokku in "The Essential Haiku," says in part:

"The courtesans, or prostitutes, are 'yuujo 遊女'. And it is hard to know how to translate the word. For an account of the distinctions between 'maiko' (apprentice geishas), 'geisha', and 'yuujo', see Liza ｄalby, 'Geisha', Berkeley; University of California Press, 1983.

Geishas were trained in the arts and in social graces, 'yuujo' in 'toko no higi 床の秘儀', the techniques of sexual pleasures."


And here is an exerpt from a discussion (the whole discussion is wellworth reading!) of this hokku as being on the topic of love:

Basho shifts his scenes from mountains to rivers to valleys to forests and we would also expect him to insert episodes dealing with love, flowers, the moon, etc.
Basho describes for us a variety of natural settings and intersperses certain human encounters.

At Nasuno it was a charming and innocent little girl, at Kisagata it was lady Seishi he is reminded of to enrich the mood of his narrative. It is not surprising then that along the Echigo Road he chooses to include an encounter with courtesans.

The element of love is also in play here in his earlier references to Lady Seishi and then to the Tanabata festival, and now he speaks of commercial love. This is reinforced by his allusions to The Tale of Genji and to the Wakan Roei Shu and to Eguchi Yujo.
Indeed, Basho seems to be parodying Saigyo's experience with the courtesans at Eguchi."
quote from uoregon.edu-kohl

Here is an account given by the commentator Yamamoto of Saigyo's experience with the courtesans of Eguchi,
translated by Ueda in his book, "Basho and His Interpreters:"

One day the monk Saigyo, having encountered a sudden shower in the village of Eguchi, asked for shelter at a nearby house but was denied by its mistress, a courtesan. Thereupon he sang out:

You'd never bring yourself
to hate and foresake this world
no matter how I plead...
Yet, how can you begrudge
to lend a temporary shelter?

The mistress responded with the waka:

Knowing you are someone
who has forsaken this world,
I naturally thought
you would not be concerned
with this temporary shelter.

This legend was recorded in 'Senjuushoo' [Selected tales, 13th c.] and was also made into a noo play, 'Eguchi'. Basho drew upon the legend in writing this hokku.

The bush clover stands for the courtesans, the moon is Basho.
Koseki
source : Ueda, books.google.co.jp

Under one roof, prostitute and priest,
we all sleep together:
moon in a field of clover
Tr. Hamill


Under the same roof
Prostitutes were sleeping --
The moon and clover.
Tr. Keene


Under the same roof
Courtesans, too, are asleep--
Bush clover and the moon.
Tr. Ueda 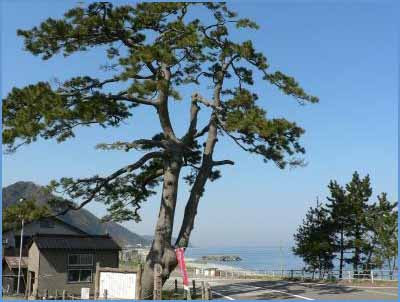