On the way to Tsuruga, Basho had to cross the pass

It Tsuruga, on the night before the full moon,
Basho visited the Kehi shrine 気比神宮.

behold the moon!
while the reeds at Jewel Bay
are still uncut
Tr. Barnhill


the moon beams falling
on the reeds of Jewel Bay
before they are cut
Tr. Chilcott 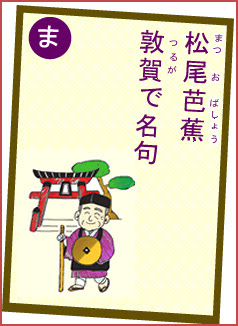 The white peak of Mount Shirane went out of sight at long last and the imposing figure of Mount Hina came in its stead. I crossed the bridge of Asamuzu and saw the famous reeds of Tamae, already coming into flower.*
Through the barrier-gate of Uguisu and the pass of Yuno, I came to the castle of Hiuchi, and hearing the cries of the early geese at the hill named Homecoming, I entered the port of Tsuruga on the night of the fourteenth. The sky was clear and the moon was unusually bright. I said to the host of my inn, 'I hope it will be like this again tomorrow when the full moon rises.'
He answered, however, 'The weather of these northern districts is so changeable that, even with my experience, it is impossible to foretell the sky of tomorrow.'
After a pleasant conversation with him over a bottle of wine, we went to the Myojin Shrine of Kei, built to honor the soul of the Emperor Chuai.* The air of the shrine was hushed in the silence of the night, and the moon through the dark needles of the pine shone brilliantly upon the white sand in front of the altar, so the ground seemed to have been covered with early frost. The host told me it was the Bishop of Yugyo II who had first cut the grass, brought the sand and stones, and then dried the marshes around the shrine, the ritual being known as the sand-carrying ceremony of Yugyo.

The moon was bright
And divinely pure
Upon the sand brought in
By the Bishop Yugyo.


It rained on the night of the fifteenth, just as the host of my inn had predicted.

The changeable sky
Of the northern districts
Prevented me from seeing
The full moon of autumn.


Asamuzu
"Asamuzu no hashi" is a Makura Kotoba. A reference to this bridge is found in Sei Shonagon's Pillow Book where she includes it in a list of bridges.

Tamae
The reeds of Tamae have often been celebrated in poetry. Minamoto Shigeyuki in the Goshuishu has this:
Natsu kari no/ tamae no ashi wo/ fumishidaki/ mure nuru tori no/ tatsu sora zo naki.
Also, Fujiwara Toshinari in Shin Kokinshu #932 has:
Natsu kari no/ ashi no karinu mo/ awarenari/ tamae no tsuki no/ myoho no sora.
(H.H. Honda's translation: Enjoyable is sleep/ lying on reaped reeds/ beneath the summer moon/ at daybreak in Tamae.

Uguisu
The barrier at Uguisu no seki is used as a Makura Kotoba. Already by Basho's time the barrier gate was gone.

Myojin Shrine
This Myojin Shrine is the most famous shrine in Echizen. The Emperor Chuai is said to have ruled from 192-200. His wife was the Empress Jingu.

Yugyo II
Yugyo II was the chief disciple of Yugyo I who was more commonly known as Ippen Shonin. The man Basho refers to died in 1319 at the age of 83.

predicted
In typical fashion Basho fails to see what he is looking forward to. He seems content to write a poem about what he did not see.

月に名を包みかねてや痘瘡の神
. tsuki ni na o tsutsumi kanete ya imo no kami .
The God of Smallpox has a shrine at this pass.


quote
I crossed the bridge at Asamutsu.
The popular pronunciation is Asamuzu, but in the “Bridge” section of Sei Shonagon’s Pillow Book, it is writen “Asamutsu.”

Asamutsu—
on a moon-viewing journey
a dawn departure
Tr. Barnhill


night of the full moon ...
the weather in the north land
so often changes
Tr. Chilcott


Hokkoku 北国, Hokuriku 北陸地方, Hokuriku chihō, Lit. "Northlands region")
is located in the northwestern part of Honshu, the main island of Japan. It lies along the Sea of Japan within the central Chūbu region. It is almost equivalent to Koshi Province and Hokurikudō area in pre-modern Japan.
The Hokuriku region includes the four prefectures of Ishikawa, Fukui, Niigata and Toyama.
© More in the WIKIPEDIA !

this old name
of Tsunuga - so full of memories
full moon in autumn
Tr. Gabi Greve

This hokku has the cut marker YA in the middle of line 2.
Lines 2 and 3 are not connected.
koishi, now natsukashii 懐かしい.
Basho is reminded of the Korean background of the name of this ancient city.

this old name
of Tsunuga so full of memories -
full moon in autumn
- Tr. Hideo Suzuki -


According to the text of Nihonshoki, 日本書紀
Tsunugaarashito, a prince of Kaya (an ancient Korean kingdom) came to Japan before Amenohiboko. sunugaarashito went to the country with his cow carrying his luggage, but the cow suddenly disappeared. In compensation for the cow, Tsunugaarashito was given a white stone which was enshrined in the village as god.


quote
Some of Kogyuryo origin can be found on Noto peninsula, but most of them found here are of Silla-Kaya origin. This is mostly due to topographical reasons such that the peninsula is situated southeast of Korean peninsula. There is a shrine named Shiragi near the nuclear plant area of Wakasa. Of course, Shiragi is Silla. We can easily assume that many had arrived here from Silla.

Important among them in relations with "Shuten-douji" is the Kehi Shrine. Situated on route to Wakasa from Kyoto, the God worshipped here is named "Tsunugaarashito". According to Nihon Shoki, he was the prince of Oogara who arrived here during the reign of the eleventh emperor Suinin. Oogara is Kaya and its prince was "Tsunuga-arashito". By the way, "Tsunuga" was corrupted into "Tsunuga" as the city in Wakasa is now called.

Now, lets pay attention to this prince's name. "Tsunuga-arashito" sounds like Japanese that means "one with horns". It is said that the prince had two horns on his forehead. I imagine, he must have an appearance of none other than Ogre.

Then, could "Tsunuga-arashito" be the model figure of "Shuten-douji" in Tanba? If he were the Ogre model in Japan, this would take an interesting turn because "Tsunuga-arashito" is also known as "Ameno-hiboko".
source : kitombo.com/e/mikami


The statue of Tsunuga Arashito is now in front of Tsuruga station. 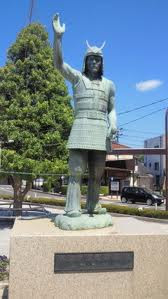 
the moon for tomorrow -
is there rain in the forecast
of Mount Hinagatake
Tr. Gabi Greve

Basho wanted to see the full moon of Tsuruga and hoped to get a hint from the weather of Mount Hinagatake. In the Hokuriku region, the weather can change very fast and even his host could not give him a definite answer.

not just the moon:
because of rain, even sumoo
has been called off
Tr. Barnhill

On the full moon night, there was a kanjin sumoo 勧進相撲 wrestling competition to solicit contributions, planned on the beach but could not be performed. 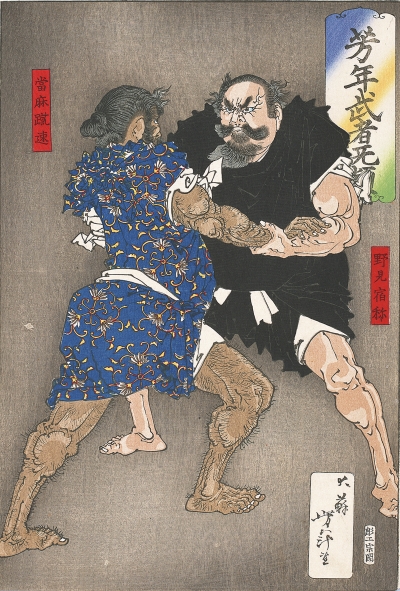 
Written on the 14th day of the 8th lunar month 1689 元禄2年8月14日.
Written at the castle Hiuchi ga joo 燧が城 - 火打城 Hiuchi Castle (Hyoochi Castle, Hyōchi Castle) on the night of the autumn moon.
This castle belonged to Kiso Yoshinaka. So here Basho remembers the famous warlord .

is this the mountain
where Yoshinaka awoke?
a moon of sorrow
Tr. Barnhill


tsuki kanashi - rather than a personification of the moon the meaning is this:
"I feel sad thinking about Yoshinaka while watching the autumn moon."