Basho reached Kurobane on the 3rd day of the 4th lunar month (now May 21) and stayed for about 2 weeks in the region. 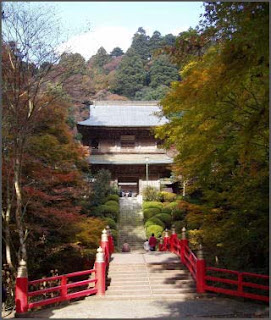 There was a Zen temple called Unganji in this province. The priest Buccho (Butcho) used to live in isolation in the mountains behind the temple. He once told me that he had written the following poem on the rock of his hermitage with the charcoal he had made from pine.

This grassy hermitage,
Hardly any more
Than five feet square,
I would gladly quit
But for the rain.

A group of young people accompanied me to the temple. they talked so cheerfully along the way that I reached it before I knew it. The temple was situated on the side of a mountain completely covered with dark cedars and pines. A narrow road trailed up the valley, between banks of dripping moss, leading us to the gate of the temple across a bridge. The air was still cold, though it was April.

I went behind the temple to see the remains of the priest Buccho's hermitage. It was a tiny hut propped against the base of a huge rock. I felt as if I was in the presence of the Priest Genmyo's cell or the Priest Houn's retreat. I hung on a wooden pillar of the cottage the following poem which I wrote impromptu.

Even the woodpeckers
Have left it untouched,
This tiny cottage
In a summer grove. 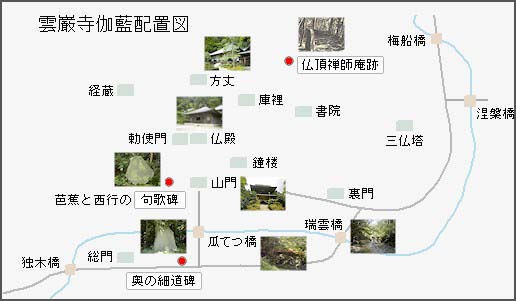 Behind Unganji temple in this province, up in the mountains, was a hermitage where the priest Butchō used to live. Butchō once told me that he had inscribed the following poem on a rock, in charcoal made from pine:

Oh how much I loathe
building a shelter at all,
even a grass-thatched
hut not five feet long or wide –
if only it never rained . . .

I wanted to see what remained of the hut, and so, walking-staff in hand, I set out. A group of young people accompanied me on the way, chattering away happily, and before I knew it we had reached the foot of the mountain. It seemed so deep. A valley path stretched far into the distance, lined by darkly clustering pines and cedars. Dew dripped from the moss, and even though it was the Fourth Month [early summer], the air still felt cold. When we had passed all the Ten Sights, we crossed a bridge and the temple gate.

Eager to discover the site of the hermitage, I scrambled up the hill behind the temple to a tiny hut built upon a rock, leaning against a cave. It was like coming upon the Death Gate of the monk Miao, or the stone chamber of the monk Fayun. I left an impromptu verse on a post in the hut:

even woodpeckers
leave the hermitage untouched
in the summer trees 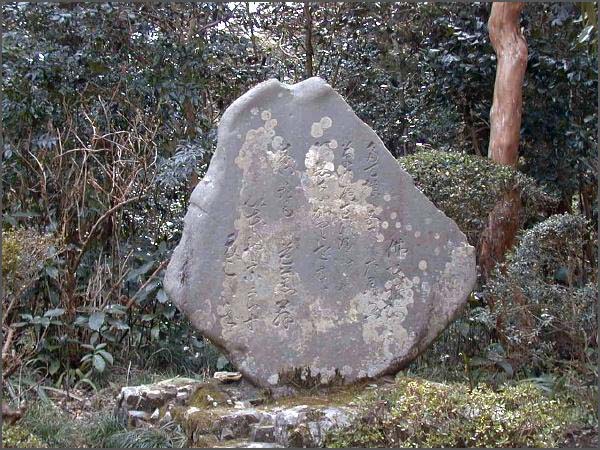 Even woodpeckers did not
Damage this hermitage
In the summer grove
Tr. Oseko


Basho left this message at the entrance post of the hermitage and left, because the Master was not at home.

Butcho had written this poem on the rock behind his hermitage:

Ah, how I detest
building any shelter at all,
even a grass-thatched
hovel less than five feet square!
Were it not for the rainstorms . . .


quote
The impact of Zen Buddhism on Basho's haikai is a popular theme for Western writers. Basho's encounter with his Zen teacher, Butcho is estimated to have taken place around 1681 (Tenwa 1) a year after Basho moved to Fukagawa.
We may recall that just before the move he composed an important poem
kare eda ni karasu no tomari taru ya aki no kure

On the withered branch
A crow has alighted-
Nightfall in Autumn.
(Tr DK)

This autumn poem is said to reflect the influence on him of the monk-poets of the Gozan Zenrin. He made the famous trip to Kashima, east of Edo, to visit Butcho, now an old friend, at the Nemoto-ji Temple in 1687 (Jokyo 4) and it was a year before this that he composed the verse


quote
Basho - II. Second Metamorphosis: From Poet to Wanderer
Basho was thankful to have a permanent home, but he was not to be cozily settled there. With all his increasing poetic fame and material comfort, he seemed to become more dissatisfied with himself. In his early days of struggle he had had a concrete aim in life, a purpose to strive for. That aim, now virtually attained, did not seem to be worthy of all his effort. He had many friends, disciples, and patrons, and yet he was lonelier than ever. One of the first verses he wrote after moving into the Basho Hut was:

Against the brushwood gate
Dead tea leaves swirl
In the stormy wind.

Many other poems written at this time, including the haiku about the banana tree, also have pensive overtones. In a headnote to one of them he even wrote: "I feel lonely as I gaze at the moon, I feel lonely as I think about myself, and I feel lonely as I ponder upon this wretched life of mine. I want to cry out that I am lonely, but no one asks me how I feel."

It was probably out of such spiritual ambivalence that Basho began practicing Zen meditation under Priest Butcho (1642-1715), who happened to be staying near his home. He must have been zealous and resolute in this attempt, for he was later to recall: "...and yet at another time I was anxious to confine myself within the walls of a monastery." Loneliness, melancholy, disillusion, ennui - whatever his problem may have been, his suffering was real.


quote
On a bright, clear day in May,
Master Butchō went to visit the hermitage of the poet Matsuo Bashō. Bashō had told Master Butchō that he wanted to meet with him and have sanzen (a private interview). Upon seeing each other, the two smiled broadly.

Butchō asked, “So, what have you realized?”
Bashō answered, “The rain has ended and the mountains are greener than ever. The moss is so bright, even greener than before!”
Butchō could not accept just that.
He asked, “What is the Buddhadharma prior to that bright green moss?”
He was asking about that pure transparent source of awareness prior to any division into good or bad, prior to any duality, prior to even a single mind moment.

People often misunderstand the “empty” state of mind of zazen as nihilism. Butchō was making certain Bashō had not made that error.
An answer came flying back:
“Jumping into the river, the sound of water.”

At that moment, something had broken the stillness by jumping into the water.
Most likely it was a frog, and this “plop” filled the ears prior to any division. Bashō expressed clearly that place without any preconceived notions, found in the very moment’s immediate encounter. He expressed pure awareness.
Butchō verified that Bashō had realized the Truth.
From this came, it is said, the famous poem:
Into the old pond the frog jumps —

Bashō is one of the four great haiku poets from Japan, and most regard him as the greatest. His art of haiku consisted of much more than composing verse. He was a very deep spiritual man who used his poetry as a tool for expressing his insights found in the world around him. Composing haiku is not about seeing how many clever poems one can write, but about expressing one's insights gained through years of introspective study.
If one can live a long life full of introspective study, perhaps one great haiku will result.

Moon by the Window:
The Calligraphy and Zen Insights of Shodo Harada
source : books.google.co.jp

quote
Haiku is simply what is happening in this place at this time.
- Matsuo Basho

Introduction
Zen Master Butcho suspected Basho's haiku writing to be distracting him from more serious meditation so he challenged Basho (who was one of his students) to give him a good reason why haiku was not a hindrance to his Zen practice. Basho replied immediately, saying "haiku is simply what is happening in this place at this time". The answer seems to have satisfied Butcho. But how is it pertinent to modern haiku poets?

It is my feeling that Basho's response points directly to what lies at the heart of haiku - life and death. These take place only in the present moment, and only in the specific place each sentient being occupies. In other words, we are not alive nor at the point of death yesterday or tomorrow, nor in any place other than where we are right here, right now.
So, if haiku is "simply what is happening in this place at this time", we ought to ask ourselves,
what is this place; what is this time?
source : Christopher Herold
Christopher Herold is founding editor of The Heron's Nest and is a lay Buddhist monk who wrote his first haiku in 1968.