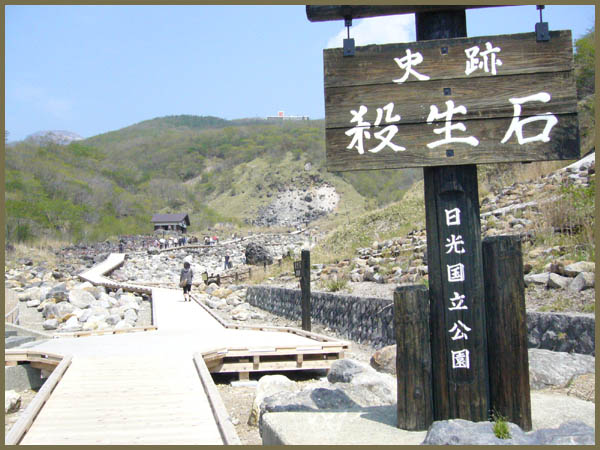 Taking leave of my friend in Kurobane, I started for the Murder Stone, so called because it kills birds and insects that approached it. I was riding on a horse my friend had lent me, when the farmer who led the horse asked me to compose a poem for him. His request came to me as a pleasant surprise.

Turn the head of your horse
Sideways across the field,
To let me hear
The cry of the cuckoo.

The Murder Stone was in the dark corner of a mountain near a hot spring, and was completely wrapped in the poisonous gas rising from it. There was such a pile of dead bees, butterflies, and other insects, that the real color of the ground was hardly discernable.

I went to see the willow tree which Saigyo celebrated in his poem when he wrote, "Spreading its shade over a crystal stream." I found it near the village of Ashino on the bank of a rice-field. I had been wondering in my mind where this tree was situated, for the ruler of this province had repeatedly talked to me about it, but this day, for the first time in my life, I had an opportunity to rest my worn-out legs under its shade.

When the girls had planted
A square of paddy-field,
I stepped out of
The shade of a willow tree.


Surprise
The farmer who led the horse asks for a poem card, a rectangular card on which one writes a poem and presents to a person. Basho characterizes this request as yasashiki koto an expression of gentle sensibility. This establishes a contrast with the sinister Murder Stone.

Poisonous gas
What actually vents from the ground around this stone is a combination of sulphur and arsenic gas.

Stream
In contrast to the poisonous miasma of the murder stone is the kiyomizu of the crystal stream. Here is where Saigyo is said to have stopped and composed his poem, Shinkokinshu #262:
(On the shore of this limpid rill/ beneath a weeping willow tree/ For a while I will lie still/ From the heat of summer free.
H.H. Honda).
The contrast between Saigyo's and Basho's poems is that Saigyo comes to this spot and pauses; Basho pauses and continues on his way.

Province
The ruler referred to here is Ashino Yasuyoshi who died in Genroku 5 (1692) at the age of 56.

Planted
There is no specific mention of girls planting the field in Basho's text, but the universal custom was for the fertile young women of the villages to do the planting in the hope that they would convey some of their fertility to the rice and insure a rich harvest.

The deputy of the mansion sent me off with a horse. The groom leading the way asked, “Could you please write me a poem card?” “Such a refined request,” I thought.

across the plain,
turn my horse over there!
cuckoo
Tr. Barnhill


Lead the horse
Across the moor
To where the hototogisu is singing!
Tr. Blyth


turn the horse’s head
towards that moor;
hototogisu
Tr. Haldane


The horse lifts his head:
from across deep fields
the cuckoo's cry
Tr. Hamill


Lead the horse sideways
Across the meadows -- I hear
A nightingale.
Tr. Keene


Across the field, turn
The direction of the horse
Towards the cuckoo!
Tr. Oseko


across the field
the horse pulls toward
the cuckoo
Tr. Reichhold


road across a plain --
turn my horse sideways
toward that hototogisu!
Tr. Ueda 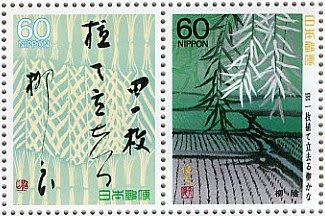 The willow where the crystal stream flows” stands on a foot-path by a rice field in Ashino village. Several times the district official, someone named Kohoo , had said “I’d love to show you the willow,” and I always had wondered where it might be. And now finally I stand in that willow’s shade.
a whole rice paddy
planted — I depart
from the willow
Tr. Barnhill


One whole field planted:
I arise and take my leave
of the willow tree!
Tr. Burleigh

The willow that Priest Saigyo wrote of, "Rippling in the pure spring water," is at the village of Ashino, where it still grows on the ridge between two paddyfields. The magistrate of this area had sometimes said to me, "I wish that I could show you that willow of of Saigyo's," and I had wondered just where it might be. And today I have actually come and stood in its shade.
Planted, the single field -
All too soon I must leave the shade
Of Saigyo's willow.
Tr. Earl Miner, University of California, 1976


a whole field of
rice seedlings planted - I part
from the willow
Tr. Shirane


they planted one field
but now I have to leave
the willow (of Saigyo) . . .
Tr. Gabi Greve

The cut marker KANA is at the end of line 3.

by the side of the road
alongside a stream of clear water
in the shade of a willow tree
I paused for what I thought
would be just a moment
Tr. Vernick 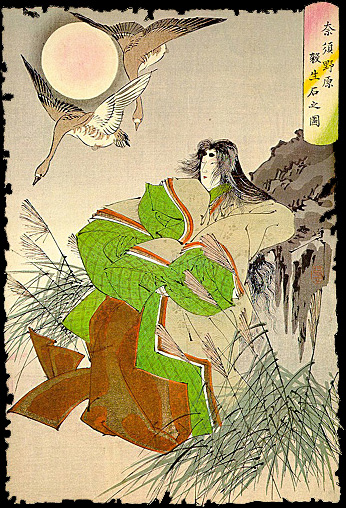 Tamamo no Mae 玉藻前 - Tamamo Gozen 玉藻御前
She was a courtesan under the Emperor Konoe (1142 – 1155), and was said to be the most beautiful and intelligent woman in of all Japan.
- snip -
After some time had passed, with Konoe all the while lavishing all his affection on the beautiful Tamamo-no-Mae, the Emperor suddenly and mysteriously fell ill. He went to many priests and fortune-tellers for answers, but they had none to offer. Finally, an astrologer, Abe no Yasuchika, told the Emperor that Tamamo-no-Mae was the cause of his illness. The astrologer explained that the beautiful young woman was in fact a kind or evil (depending on the story variant being told) nine-tailed fox (kitsune Good fox spirit. nogitsune malicious fox spirit) working for an evil daimyo, who was making the Emperor ill in a devious plot to take the throne. Following this, Tamamo-no-Mae disappeared from the court.

The Emperor ordered Kazusa-no-suke and Miura-no-suke, the most powerful warriors of the day, to hunt and kill the fox. After eluding the hunters for some time, the fox appeared to Miura-no-suke in a dream. Once again in the form of the beautiful Tamamo-no-Mae, the fox prophesied that Miura-no-suke would kill it the next day, and begged for its life. Miura-no-suke refused.

Early the next day, the hunters found the fox on the Plain of Nasu, and Miura-no-suke shot and killed the magical creature with an arrow. The body of the fox became the Sessho-seki, (殺生石) or Killing Stone, which kills anyone that comes in contact with it. Tamamo-no-Mae's spirit became Hoji and haunted the stone.
- snip -
In Matsuo Bashō's famous book The Narrow Road to the Deep North, Bashō tells of visiting the stone in Nasu.
© More in the WIKIPEDIA !


In Takamatsu, there is the Tamamo Castle 玉藻城 and Tamamo Park 玉藻公園 .
Tamamo is the makurakotoba pillow word for the region of Sanuki 讃岐, now Kagawa in Shikoku.
. WKD : tamamo 玉藻 gemweed . 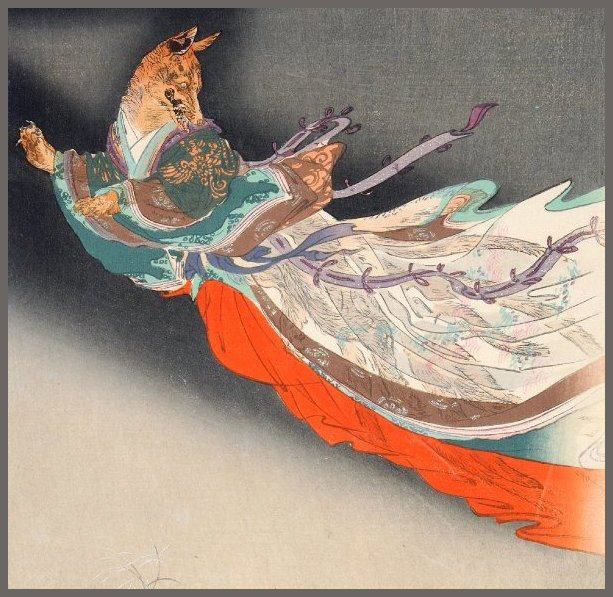 Poem by Basho in the travel diary of Sora 曾良旅日記.

the stench of the stone—
the summer grass red,
the scorching dew
Tr. Barnhill 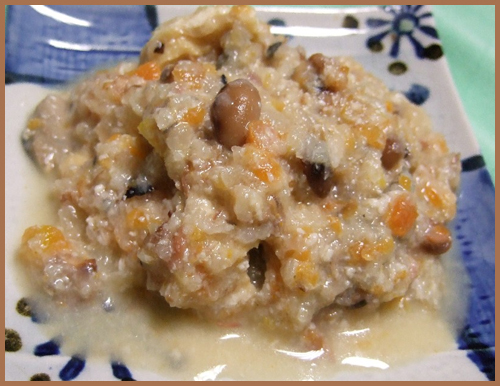 - - - - - Once upon a time
there lived a fox with nine tails at 殺生岩 Sesshoseki who caused a lot of trouble. The villagers killed it after luring it with this dish of Shimotsukare.
To appease the soul of the fox this dish is now prepared in a memorial service on hatsu-u-no hi (初午の日, literally; first day of horse in the month of February) together with sekihan ritual red rice as an offering to appease the legendary fox deity, Inari-no-shin (稲荷の神) Inari no Kami. 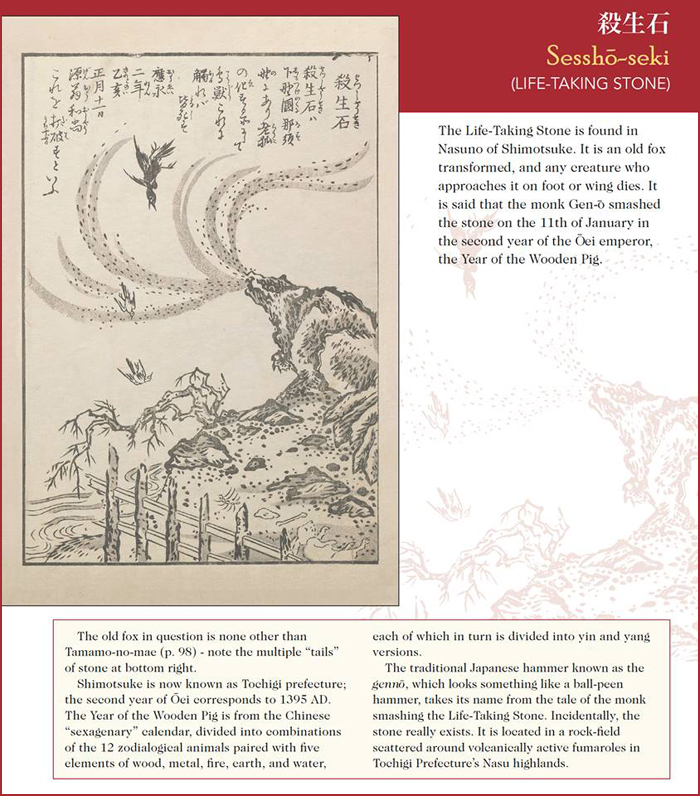 Kaizoji temple, Kamakura.
It was founded by a monk named Genō, who moved here after smashing the Life-Taking Stone, itself the revenant of the fallen Lady Tamamo-no-mae, the ninetailed fox.
As chronicled by Sekien himself -- see p. 202 of "Japandemonium Illustrated"!

- - - - - 2022 March
Mist descends upon Japan’s “Killing Stone” after ceremony to appease nine-tailed fox spirit
Earlier this month, people in Japan were on edge after it was found that the famous Sesshoseki “Killing Stone” in Nasu, Tochigi Prefecture, had broken in two.
The mist that shrouded the stone after the ceremony certainly adds an extra layer of mystery to the broken boulder and the tale of the nine-tailed fox.
Was it a sign that the fox’s spirit had left the area? Or could it be an ominous sign of things to come?
. soranews - Japan’s “Killing Stone” .