The 10 most important disciples of Matsuo Basho

They all have an entry in their own name in the WKD:
. WKD : Introducing Japanese Haiku Poets . 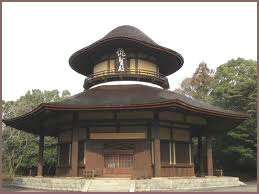 Haiseiden 俳聖殿 Haisei-Den Hall of the Haiku Saint
near Iga Ueno Castle, with a life-size statue of Basho

The Haisei-den, the great haiku poet's hall,
was built inside Ueno-koen Park in 1942 to commemorate the 300th anniversary of his birth. The building itself is shaped like the figure of Basho attired in a traveling clothes. The round roof symbolizes his sedge hat, the octagonal eaves his surplice, the pillar is his cane, and the frame of the Haisei-den is in the shape of his face. Other Basho-related facilities include the Minomushi-an, or bagworm hermitage, and the venerable Basho Memorial Hall, Basho Kinen-kan Museum.
source : www.jnto.go.jp

Karumi occupies a very important position in the development of what is known as Shofu, or the style of the Basho School.
Karumi
Matsuo Basho's Ultimate Poetical Value, Or was it?
. WKD : Essay by Susumu Takiguchi . 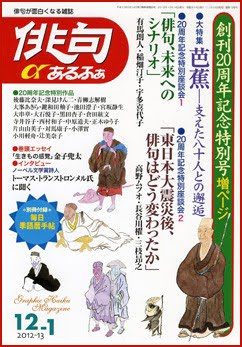 
There are the 10 most important disciples
and then there are 70 more to come.


Some concepts that Basho introduced to his disciples:

mujoo 無常 (mujo) heartless, without feeling. Impermanence.
Implies detachment and distance between object and poet. the mujo (transience) of life

shizen mu-i 自然無為 Shizen Mui - Mui Shizen 無為自然 abandoning artifice and just being oneself, naturalness and non-interference
(The concept of SELF in Zen Buddhism : jibun 自分 "myself" is short for -
shizen no bunshin 自然の分身 -I am the same as nature - nature is the same as me. In an extended interpretation
"I am part of the zooka, zooka 造化 is a part of myself, the human being in its cultural environment."


quote
- - - Kyorai records:
The Master said that some haikai styles remain unchanging for thousands of years while others are fluid with the passing of time. Although these two are spoken of as opposite sides, they are one at the base.
“They are one at the base” means that both are based on the sincerity of poetry (fûga no makoto). If one does not understand the unchanging, his poetry has no base; if one does not learn the fluid, his poetry has no novelty. He who truly understands the fluid will never stop moving forward. He who excels at a transitory fashion can only have his verse meet a momentary taste; once the fashion changes, he becomes stagnated.

- - - Hattori Dohô records:
The Master’s poetry has both the unchanging (fueki) that remains for thousands of years and the ever-changing (henka) that lasts only momentarily. These two, in the final analysis, are one at the base. This “one at the base” is the sincerity of poetry (fûga no makoto).

If one does not understand what the unchanging is, one cannot understand the sincerity of poetry. The unchanging does not depend on the old or the new, nor is it affected by changes and fashions; it is firmly rooted in the sincerity of poetry. Looking at the poetry of poets from different generations, one finds it changes with each generation. Yet, there are many poems that stay beyond the old and the new, many poems that are as deeply touching to us as they were in the eyes of ancients. These belong to the unchanging poetry one should understand.

On the other hand, it is the rule of the Natural (ji’nen 自然) that everything undergoes countless changes and transformations. If haikai does not go through changes, it cannot be renewed. If one does not seek change, one can only gain popularity in a transitory fashion, but never reach the sincerity of poetry.

Those who are not determined to pursue the sincerity of poetry cannot grasp the change rooted in it. They can only follow behind the footsteps of others. Those who pursue sincerity never stop at where they have arrived and naturally step forward. No matter how many changes and varieties haikai may have in the future, if it is change rooted in sincerity, it belongs to the Master’s poetic tradition.
The Master said:
“Don’t ever lick the dregs of the ancients. All things constantly renew themselves as the shifts of four seasons, and this is true of haikai.”

“The Master said:
‘The changes of Heaven and earth are the seeds of poetry.’
What is still is the stance of unchanging (fuhen). What is in motion is change (hen).” Kyorai compares fueki and ryûkô to inaction and movement; Dohô defines fuhen and hen as “what is still” and “what is in motion.”
Both pairs of terms find their parallels in the Zhuangzi.

Fueki and ryûkô represent the dialectic aspects of Bashô’s poetics of the Natural, which constitutes the substance of the “sincerity of poetry.” The ambiguous terms Kyorai and Dohô use, in this context, are logically meaningful: “inaction” and “stillness” designate the constant principle of the Natural and the noninterference with its expression in poetic creation, and “movement” and “motion” the adherence to the ever-changing nature of the universe and to its novel manifestations in poetry.

"The poetic mind must always remain detached (mujo) and eccentric (kyoken).
The thematic materials must be chosen from ordinary life.
The diction must be entirely from everyday language."
source : Peipei Qiu: Basho and the Dao


". . . behold the clouds over the east bank of the Yangzi River
when you are looking at the moon above the Kasai shore. "


On composing haiku the Master once commented:
“If you get a flash of insight into an object,
put it into words before it fades away in your mind.”
He also said: “
Toss out the feeling to the surface of your poem.”

These teachings mean that one should set his poetic feeling into form instantly after he gets into the realm, before the feeling cools off.
In composing haiku there are two ways: “becoming” and “making”.
When a poet who has always been assiduous in pursuit of his aim applies himself to an external object, the color of his mind naturally becomes a poem. In the case of a poet who has not done so, nothing in him will become a poem; he, consequently, has to make out a poem through the act of his personal will.8
source : terebess.hu

MUJO
The basic tenet of Buddhism, that of mujo, or impermanence, is naturally reflected in most haiku, Chiyo-ni's as well. This follows Basho's edict on the importance of becoming one with nature and capturing its fleeting quality. Althought every culture have an awareness of the mutability of life, in Japanese culture there is language for it that is both artistic and religious.

Mujo embodies people's thinking and is an aesthetic term pervarding the poetry as well. Perhaps the cataclysmic naature of Japanese archipelago - with its head quarters, tidal waves, and volcanic eruptions - made people more acutely aware of the passing of things. This awareness became a natural part of haiku, in a poignant way. Haiku, which usually refers to nature, depicts it not as "fallen", as in the West, but transient; there is an acceptance and appreciation of its evanescence.
In Japanese aesthetics this is called "aware", or sad beauty.
source : Julia Manach - 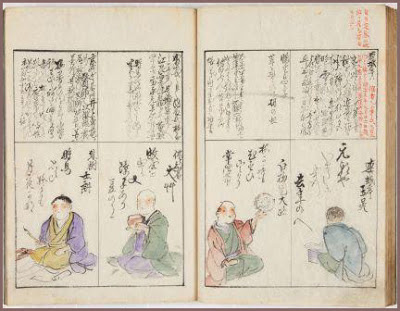 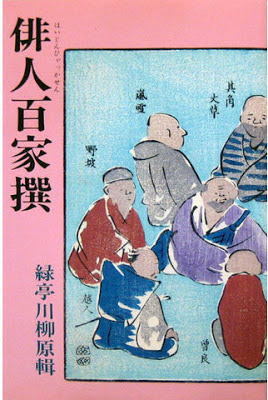 Genroku (元禄) was a Japanese era name after Jōkyō and before Hōei.
This period spanned the years from 1688 through 1704.
Matsuo Basho died in 1694 - Genroku 7 元禄7.
. Genroku Haikai Poets 元禄俳諧.

© More in the Japanese WIKIPEDIA !

"Basho once gone,
we have no master to teach us,
whether the year begins or ends."

Since Basho left the world,
Not yet has
"The year drawn to its close."

"Rushing along in the road to fame and riches, drowning in the sea of desire, people torture their ephemeral selves. Especially on New Year's Eve their behavior is unspeakable. Despicably walking about knocking at doors, treating everyone with contempt unnecessarily, insanely vulgar behavior, and so on, is not decent. Even so, we foolish mortals can hardly escape from this world of dust and sin.

The year draws to its close;
I am still wearing
My kasa and straw sandals.

Reading this poem quietly in a corner of the room, my mind becomes clear; were I living Basho's life, how good it would be! The verse is uplifting to me, and it may be called a Great Rest-and-Enlightenment as far as I am concerned.

Basho once gone,
we have no master to teach us,
whether the year begins or ends."


Basho, the traveller :
. Matsuo Basho 松尾芭蕉 - Archives of the WKD .