The main entry is now HERE 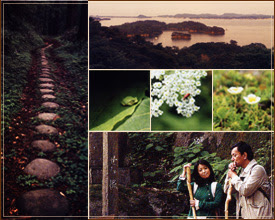 Days and months are the travellers of eternity.
The years that pass are also but travellers in time.

松尾芭蕉
Basho was 46 when he started his tour on the 27 of March, 1689. (May 16 in the modern solar calendar.)
His tour took him over 2400 kilometers on foot! It took him five years to complete his report of this walk. It includes 51 hokku and is not a simple diary, but a work of literature, including fiction and philosophy.

He visited many "poetic pillows", uta makura 歌枕, famous places where poets before him had been visiting and writing poetry about.
While he was thus travelling the road of former famous poets like Saigyo, he was also travelling along his own life, even toward the future. He lived in a time when the age of 50 was considered a good time to die!
Jinsei, gojuu nen! 人生五十年！

. Barnhill : the concept of MUJŌ .
impermanence

fuga no makoto is a result or product of the dynamism of two colliding forces: fueki ryuko, which is another important teaching of Basho.
Fueki simply means "no change" and refers to values of a permanent and enduring nature.

Ryuko, on the other hand, means "changing fashions of the time" and refers to newness, innovation, originality or unconventional values that would break with old ways in a revolutionary manner.

For instance, Beethoven created new and innovative music, ushering in a new age and setting a new trend. However, he did not do so without first having been steeped in classical music of an old tradition. Thus he had fueki ryuko and left legacy of permanent value.
None of us is Beethoven, but all of us can become a little Beethoven! Fueki ryuko is an abbreviation of senzai-fueki ichiji-ryuko (eternal no-change and temporary fashion).

When fueki and ryuko collide and interact in a dynamic explosion of creative haiku writing, the result could be like a newly born baby taking after both parents but different from both. And there is a single ultimate value that lies beyond fueki ryuko, and that is nothing but fuga no makoto.


Basho edited the haiku presented in "Oku no Hosomichi" according to the rules of RENKU, including moon, cherry blossoms and two about love.
© Etsuko Yanagibori

A first ku (hokku) that can stand alone, usually with a mention of a special area, an independent hokku, is called
jihokku 地発句（じほっく）

The last ku of a linked verse is "ageku 挙句", and there is a popular Japanese proverb, ageku no hate 挙句の果て, at the last ku, meaning "at last".

The walk starts in Edo.

spring is leaving ..
birds sing and the eyes of fish
are full of tears

Basho at Senju 千住
in 1689, taking final leave from his friends.

. WKD : 遊行柳 (ゆぎょうやなぎ ) Yugyoyanagi .
One of the famous "utamakura" places of Basho's travel. The tree has been re-planted many times over the years, but the atmosphere is still very much that of the Edo period.


Near Nikko is Mt. Dantai and a group of Jizo stones, called

O-Bake Jizoo 化け地蔵 the monstrous Jizo statues
Every time you count them, you get a different number.
Quite possibly Basho has tried to count them too ! 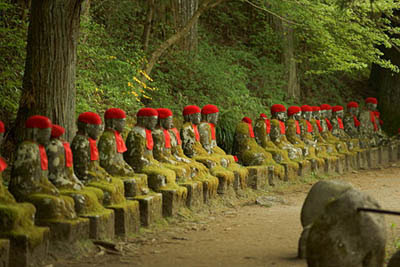 
Shirakawa, "White River",
from here the Road to the North finally starts.

Two shrines at the border to the Northern Territories. One on each side of the frontier line. On the inner side a shrine for the female deity (Tamatsushima Myojin 玉津島) to protect the interior. On the outer side a shrine for a male deity (Sumiyoshi Myojin 住吉) to protect from enemies of the outside. Travellers in the Edo period used to pray here for a safe trip and gave thanks after a trip was finished.

The local daimyo Matsudaira Sadanobu had a stone memorial built in memory of this frontier gate about 100 years after Basho passed the area.

白河小峰城, Shirakawa Komine Castle
Matsudaira Sadanobu was Lord of this castle. Lord Matsudaira (1759 - 1829) was well liked and did a lot for his people. He built the first park for commoners in Japan, the famous South Lake Park, Nanko Koen (Nankoo Kooen) 南湖公園 .

The famous poet Io Sogi (Soogi, Sougi 飯尾宗祇 いいおそうぎ) on his way to a poetry meeting for linked verse in Northern Japan met a poor girl here selling cotton. When he started talking to her, she answered him with a perfect waka verse. He felt quite ashamed at this and went back to Kyoto without attending the poetry meeting.


Station 12 : Sukagawa and Asakayama : 安積山 In Memory of a Waka


Dresses made of paper, kamiko 紙子,紙衣

Paper clothing was used by poor peasants to keep warm in winter. Basho might have used one of these warm robes from Shiroishi.

In Osaka Kabuki, the main actor wears a robe made of paper, kamiko 紙衣. This does not flow naturally around the body and the actor has to make extra efforts to show a natural pose.


Matsushima is one of the three most beautiful secnic areas of Japan.

summer grass!
only a trace of dreams
of ancient warriors

Basho followed in the footsteps of the tragic fate of the warrious Yoshitsune and Benkei (chinkon no nen 鎮魂の念) with this visit. He might also have used the travel to explore and find the depth and tragedy of his own being.


The "Shining Hall" is the golden mausoleum of three generations of the Fujiwara Clan. The rain of the rainy season has fallen on it for more than 500 years when Basho visited.

unchanged by the rain
of many rainy seasons -
the Golden Hall

kenkon no hen 乾坤の変
(the changing of heaven and earth)

The changing of heaven and earth is the heart of the nature spirit in haiku. Catch the changing of nature and you have what you need to write true haiku.

The walk over the steep pass takes more than 3 hours. Basho hired a young guide to make sure he would not loose his way. From the top of the pass you can see Mount Gassan in the background.
After the dangerous crossing, Basho stayed with the rich merchant Seifu (Suzuki Michiyu), who had made his fortune with
Safflower, saffron flower (benibana, beni no hana) .

Farmers wear a specially shaped straw hat, called "natagiri なたぎり(photo) , in the shape of this pass.

This is one of the few hot springs near a silver mine. The workers used to go there and heal their wounds or just rest and relax after the hard work in the mines.

Basho might have stayed there to rest after crossing the pass, before walking on to Obanazawa.

The Three Mountains of Dewa used to be part of a famous pilgrimage, representing LIFE (Haguro), DEATH (Gassan) and NEW BIRTH (at Yudono).

"As I sat reflecting thus upon a rock, I saw in front of me a cherry tree hardly three feet tall just beginning to blossom - far behind the season of course, but victorious against the heavy weight of snow which it had resisted for more than half a year.
I immediatley thought of the famous Chinese poem about 'the plum tree fragrant in the blazing heat of summer' and of an equally pathetic poem by the priest Gyoson, and felt even more attached to the cherry tree in front of me. "
Station 30 - Gassan

At Mt. Gassan, Basho saw the Mountaintop Cherry blossoms, minezakura 嶺桜.
They flower much later than the ones down in the valley. That is why on Mt. Gassan you can experience the three ingredients of Japanese ascetics, Snow, Moon and Cherry blossoms, (Setsugetsuka, Setsugekka 雪月花) at the same time.
SETSUGEKKA, Japanese Art and the Japanese View of Nature
by Isamu Kurita, MOA

Basho went on to Mt. Yudono, where it is forbidden to talk about your experiences there. I visited there many years ago.
Dewa Sanzan; 'Three sacred mountains of Dewa'
Gabi Greve


Some thoughts from Etsuko Yanagibori

thanks
for the wind
with the smell of snow

He changed this later and this is the official haiku now.

Thanks
for Minamidani
smell of snow

The original haiku has a kigo for summer, kaze kaoru. Basho visited the temple in early summer, June 4th.

Yudono is a very sacred plate for the Godess of Dewa.
We can read a romantic interpretation from this haiku

no speaking
in the place of Yudono-den
wet my cuff

When people enter the place of the goddess to pray the god, they put off their
shoes and walk around the rock of the gods without talking.


So holy a place
The snow itself is scented
At southern Valley.


How cool it is here.
A crescent moon faintly hovers
Over Mount Haguro.

The peaks of clouds
Have crumbled into fragments
The moonlit mountain


I cannot speak of
Yudono, but see how wet
My sleeve is with tears.
Tr. Donald Keene

"tsuki no yama" this is also the name of the mountain itself
Gassan 月山.

Oh now Kisakata !
What special food do they eat
at the shrine festival?


Kisakata is a superb place to take a leisurely countryside walk.
Kanmanji is surrounded by a sacred grove of old-growth laurel trees (tabunoki たぶのき【椨】 Persea thunbergii or Machilus thunbergii).
MORE : Basho in Kisakata 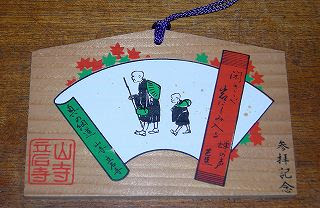 
The difficult part of this journey, Oyashirazu 親不知  (not minding your parents) and Koshirazu (not minding your children) , refers to an area along the coast between Niigata and Ichiburi where the mountains are right to the sea shore with their sheer cliffs. The waves drone against the base of the cliffs and the only way to get past this is to wait for the moment when the waves receede and then run for your life !

The grand old tree at Ichiburi

Kurikara means 'black dragon' in Sanskrit.
The temple Kurikara Fudo-son is located near Kurikara Pass, a place famous for the battle between the Heike Clan and Saso Yoshinaka during the 2nd year of the Eiju period (1183). The statue of Fudo Myo-O is said to be carved by Kobo Daishi.


My Details are here
Kurikara, the Sword of Fudo Myo-o

. The mystery background story
of the bell at the bottom of the sea
(This haiku is not included in the Travelogue by Basho.)
Visit to the Shrine Kehi Jingu 気比神宮 with a haiku about the moon.

Sora, who had left Basho earlier on the trip, had hurried to Ogaki to gather many haiku friends to celebrate the goal of the travels of Master Basho and make this a memorable ending of the long tour.


The last haiku, written at Ogaki

(like) a clamshell
divided in two we depart now
into this autumn . . .


At the end of the journey


"The Narrow Road to the Deep North"
PDF-File
Translations by Haider A. Kahn and Tadashi Kondo

Beckoned by the cloud-scattering winds and Dōsojin, the male-female guardian god of the road, longing to see the moon rising over Matsushima, Matsuo Bashō (1644-1694) left Edo for Oku at the end of spring in the second year of Genroku (1689).

Travels along the path of Matsuo Basho, Japan’s 17th-century haiku master, help bring his words to life.
On the Trail of a Ghost
© National Geographic, Howard Norman, January 2008


Haiku by Matsuo, Basho, from "Narrow Road to Oku".
Dr. Donald Keene has generously given to me his permission to use his translation of the Basho's haiku.
I will be showing my haiga of all the haiku in "Narrow Road to Oku"
KUNI from Nara
source : seehaikuhere.blogspot.com


Walking with Basho in Japanese 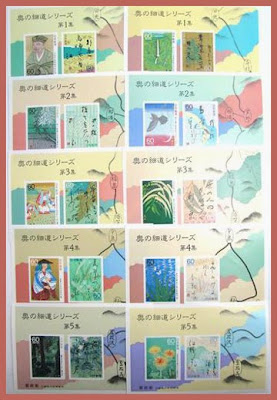 Stamps about "Oku no Hosomichi"


Chen-ou Liu about
. The Narrow Road to the Interior .