On my way to Yamanaka hot spring, the white peak of Mount Shirane overlooked me all the time from behind. At last I came to the spot where there was a temple hard by a mountain on the left. According to the legend, this temple was built to enshrine Kannon, the great goddess of mercy, by the Emperor Kazan, when he had finished his round of the so-called Thirty- three Sacred Temples, and its name Nata was compounded of Nachi and Tanigumi, the first and last of these temples respectively. There were beautiful rocks and old pines in the garden, and the goddess was placed in a thatched house built on a rock. Indeed, the entire place was filled with strange sights.

Whiter far
Than the white rocks
Of the Rock Temple
The autumn wind blows.

Bathed in such comfort
In the balmy spring of Yamanaka,
I can do without plucking
Life-preserving chrysanthemums

The host of the inn was a young man named Kumenosuke. His father was a poet and there was an interesting story about him: one day, when Teishitsu (later a famous poet in Kyoto but a young man then) came to this place, he met this man and suffered a terrible humiliation because of his ignorance of poetry, and so upon his return to Kyoto, he became a student of Teitoku and never abandoned his studies in poetry till he had established himself as an independent poet. It was generally believed that Teishitsu gave instruction in poetry free of charge to anyone from this village throughout his life. It must be admitted, however, that this is already a story of long ago.

My companion, Sora, was seized by an incurable pain in his stomach. So he decided to hurry, all by himself, to his relatives in the village of Nagashima in the province of Ise. As he said good-bye he wrote:

No matter where I fall
On the road
Fall will I to be buried
Among the flowering bush-clovers.

I felt deeply in my heart both the sorrow of one that goes and the grief of one that remains, just as a solitary bird separated from his flock in dark clouds, and wrote in answer:

From this day forth, alas,
The dew-drops shall wash away
The letters on my hat
Saying 'A party of two.' 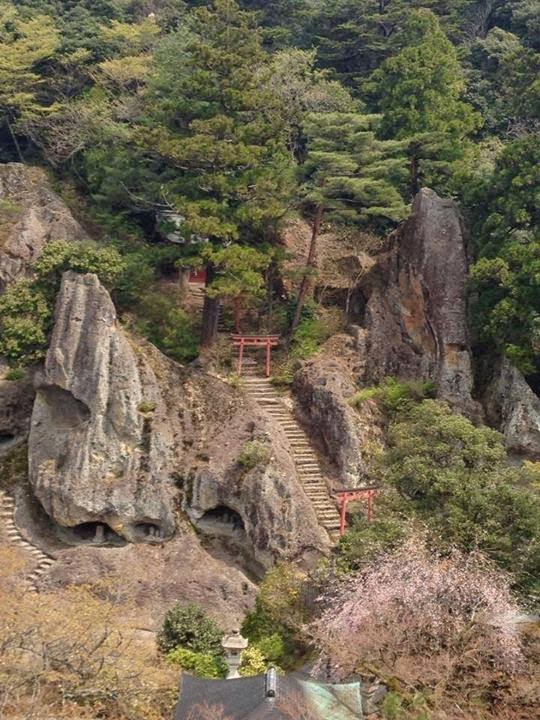 - Homepage of the temple
- source : www.natadera.com


- quote -
The origins of Natadera
Natadera has its principal deities the Eleven-headed Thousand-Armed Kannon(Sanskrit:Avalokitesvara), the Hakusan Myori-daigongen(Engulish:the Supreme Power of Hakusan), and the natural rocky mountain caves, has worshipped both gods and Buddha from it's beginnings.
Taicho brought the teachings of Jinenchi from the heart of the Yoshino mountains, and founded the temple in the beginning of the Nara Period, in the first year of the Yoro Era(717 C.E.), calling it Iwaya-dera.
The name was changed to Natadera by the emperor Kazan, who ruled during the Heian Period. In his later years, Kazan often stayed at the temple, and designed the gardens to resemble the Fudaraku mountain of the Pure Land on which lives Kannon (Skt:Sukhavati.)
- source : www.natadera.com/en -

Yamanaka -
no need to pluck chrysanthemums:
the fragrance of these springs
Tr. Barnhill

from this day forth -
the inscription washed away
by the dew on my hat
Tr. Barnhill 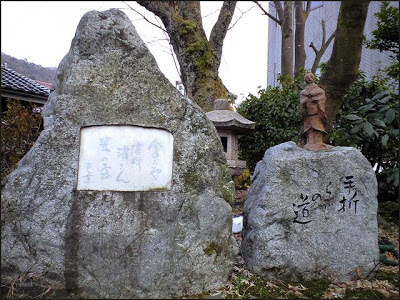 
quote from Will Aitken
The Kakusan Gorge is so beautiful, the air so clear, the birdsong so piercing, there's an air of unreality about this walk, as though it exists outside of time.

In a way it does, because people come from all over the world to this isolated peninsula in northern Honshu, a three-hour train ride from Tokyo, to stroll this path and to view the same landscape that Basho, one of Japan's greatest and most influential poets, first visited in 1689. He bathed at a mineral springs in Yamanaka Onsen, the village at the end of this walk, and afterward wrote these lines:

After bathing for hours
In Yamanaka's waters
I couldn't even pick a flower.
Tr. Will Aitken

- snip -
For a poet noted for the stark simplicity of his lines, Basho led a tumultuous life.
. . . . And as for his humble ways, he and Sora usually stayed, not in picturesque huts where they shared frugal meals, but instead lived well in the villas of wealthy merchant-class patrons along the way.


Matsuo Basho took a break from his "Narrow Road to the Deep North" Journey and stayed at a Ryokan named "Izumiya" in Yamanaka Onsen from July 27th (September 10th on the solar calendar) to August 5th of Genroku 2 (1689).
During the nine days, Basho visited the Shrine of the Healing Buddha, spent a relaxing time at the hot spring, and enjoyed the magnificent landscape of Yamanaka Onsen thoroughly.
Later he praised Yamanaka Onsen as one fo the three best hot springs in Japan.

Afterwards Matsuo Basho recited a haiku:
"Yamanaka ya Kiku wa taoraji Yu no nihoi".
This haiku means that Yamanaka Onsen can give one longevity and "after going into Yamanaka Onsen's hot spring water, you don't even need to drink the dew of the chrysanthenum of eternal youth that is collected by the Chinese Chrysanthenum Fairies.". 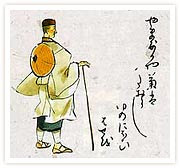 "Gyoki, Nobutsura, Rennyo, Basho" are worshipped as the "Four Sages" of Yamanaka Onsen since ancient times and are respected even now as the persons who built the foundation of Yamanaka Onsen.

Gyoki was the monk who discovered Yamanaka Onsen during Nara Era, and Nobutsura Hasebe was the Lord of Noto who revived this hot spring which was lying derelict.
The eminent monk Rennyo also left numerous legends behind him during his visit to the Yamanaka Onsen.

The Four Sages were deeply connected with Yamanaka in different eras; and with 1300 years of history, visitors can still feel the rich culture in this Onsen District along with the constantly flowing hot springs that emerges from underground.
source : www.yamanaka-spa.or.jp

by the fish-luring fires
a bullhead - under the waves
sobbing
Tr. Gabi Greve

In Yamanaka Hot spring there are 10 specialities, one of them the "Takase fish-luring fires" 高瀬の漁火".


Fires to lure fish have been used in Japan since olden times:

leaving the hot springs,
looking back how many times —
beneath the mist
Tr. Barnhill


leaving the hot springs:
looking back how many times,
searching thruogh the mist
Tr. Chilcott


Basho wrote this and the following hokku as a parting gift for the owner of the hot spring lodging where he had stayed.

The cut marker YA is at the end of line 2.

leaving the hot-springs:
tonight my skin
will be cool
Tr. Barnhill

leaving the hot springs:
tonight my skin will feel so
very cool, so cool
Tr. Chilcott 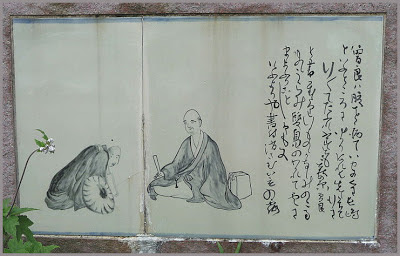 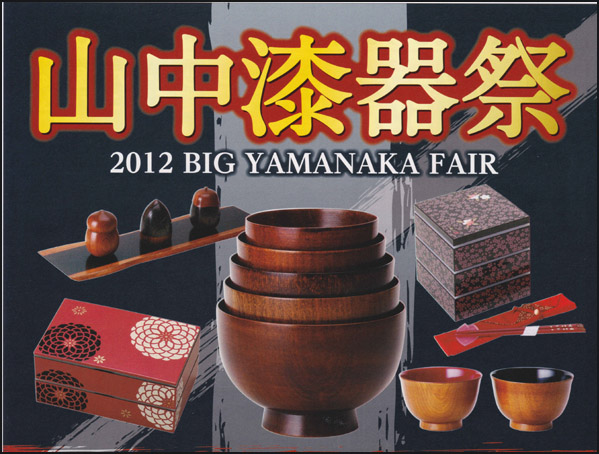 Yamanaka laquer ware 山中漆器
wood carved into simple forms with a layer of laquer to keep it usable for a long time.